This article is about the flying ships. For the campaign setting, see Spelljammer: AD&D Adventures in Space.

Spaceship, planar vessel
A spelljammer was a type of magically powered vessel that could travel great distances, even into the Sea of Night.[3] Each ship had a magical helm or "captains-chair" that allowed a suitably powerful mage to pilot the ship.[4] Some spelljammers were also capable of traveling to other planes of existence.[2]

Spelljammers varied enormously in design, but many contained common elements. One such element that was present in a variety of spelljammers were fan-shaped sails,[2] whose purpose was to harness the flow of the phlogiston,[5] or, if within a planet's atmosphere, the wind.[2]

Spelljamming technology had existed for a very long time. For example, early historical accounts from the Second Age of Calimshan described three beholder colony ships crashing into the Alimir Mountains in Tarsakh of −2381 DR. There were also myths from the same era about "chariots in the air" and "monstrous flying birds and insects" that led some scholars to postulate that these too were spelljamming craft.[6]

Many of these vessels (and vessels like them) still existed on Faerûn in the mid-14th century DR.[7] The elves of Evermeet maintained a small fleet of them,[8] while the derivatives of these strange and mighty vessels could be seen flying openly over the southern nations of Nimbral and Halruaa.[citation needed]

In the late 15th century DR, spelljammers and astral ships regularly delivered supplies to the githyanki inhabitants of Stardock.[9] The asteroid was visited roughly once a month by spelljammers typically crewed by gnome traders, githyanki, or other races.[10]

Around the same time, the squid ship–class spelljammer Scavenger was captured by Halaster and brought to the Caverns of Ooze level of Undermountain.[11] 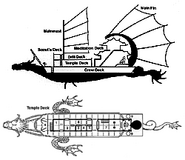 A dragonship-type spelljammer.
Add a photo to this gallery

Retrieved from "https://forgottenrealms.fandom.com/wiki/Spelljammer?oldid=571972"
Community content is available under CC-BY-SA unless otherwise noted.