Dull red[3]
Spinagons (pronounced: /ˈspɪnɛgɒnz/ SPIN-eh-gonz[8]), or spined devils,[1] were winged, porcupine-like devils that delivered messages to other, more powerful members of their kind.[4] Covered in spines and yet completely spineless, they were often bullied by other intelligent devils due to their weakness and were only able to torment the few beings weaker than them in turn.[7]

Spinagons were the smallest of the baatezu, resembling 2‒3 ft (0.61‒0.91 m) tall, 25 lb (11 kg) gargoyles. They had long, keen talons at the ends of their hands and feet, and spines bristled their whole bodies.[7][4] Contributing to their traditionally devilish appearance were the short, 4.5 ft (1.4 m) long, military forks they often carried, if not other fearsome weapons.[4] Their eyes glowed a muted red, and they emitted high-pitched giggles and shrieks so obnoxious that even other devils found them grating.[3]

In order to engage in their love of torture and torment, spinagons traveled in flocks to compensate for their small size.[3] As their victims cried and begged for their lives, spinagons would cackle and mockingly mimic their words in a thick, garbled, infernal accent.[7]

They were relatively puny and craven compared to other devils but still craved power and promotion.[1][4] While loyal in their duties as messengers, they could still occasionally be intimidated into disclosing their messages and were easy to control with promises of plunder and destruction.[2][4]

Although their lack of intelligence made them loyal, it diminished their capacity to act as useful agents, as they were incapable of discerning important and irrelevant information. Due to not properly understanding the purpose of collecting treasure, they did not carry valuables unless instructed to.[7]

Spinagons could fire the spines from their bodies and tails which would burst into flame once launched, burning those hit and igniting flammable materials.[4] The amount of spines they could fire was agreed to be about two every few seconds but while some believed they could only fire 12 within a given time others said their spines would immediately regenerate, thus giving them unlimited ammunition.[3][4] The spines were said to be poisonous and could be fired from the air, although if forced into melee they could claw at their opponents with their talons or hurl themselves at their enemies.[2][3]

Unlike other devils, they had the spells change self, produce flame, scare and stinking cloud at their disposal. Once every day they could attempt to call other spinagons for assistance.[3]

Lacking both pride and power, spinagons normally attempted to find and alert more dangerous baatezu to fight in their stead rather than engage an enemy themselves.[4] Unless they were cornered, incapable of bargaining or persuading their enemy away from violence, and had some combat advantage they shunned fighting in favor of retreat.[7][4]

When fighting, they similarly disdained having to enter melee, instead circling their opponents from above while raining down a shower of spines.[3] If a target was too hard to hit they tried to fly closer to get a better shot but still stayed out of reach.[7] Only once their victims were weakened might they descend and prod them with their weapons or rip them to shreds with their claws.[2]

On the other hand, spined devils looking for victims hid in a location waiting for potential victims to walk by for them to harass. They eagerly shot their spines at such unfortunate passersby, but were still wary enough to exercise caution. They quickly fled when an encounter looked dire by scattering under the cover of a stinking cloud or scare spell, or attempting to summon aid. Their most powerful abilities were kept in reserve if a retreat was needed.[3][7]

“
It's best to succeed early and avoid the trouble of dealing with the in-betweens.
”
— The "lesson" a spinagon needed to learn for promotion.[10]

Spinagons were treated, and behaved as, the vermin of the Nine Hells, lurking deep within its rocky wastelands and infesting the shadows of its infernal cities due to the abundance of hiding places in such areas.[7] Although they could be found on all the layers of the Nine Hells, they were most common in the middle layers of Dis, Minauros, Phlegethos, Stygia, Malbolge and Maladomini.[4][6] They also could be found on the Material Plane in fewer numbers with other wicked beings due to their dimness and weakness making them easy for summoners to control.[2]

Their plentitude throughout Baator was due to the fact that that the vast amount of duties they had to complete took them throughout all of the Nine Hells. They acted as lackeys and servants for more powerful baatezu (essentially any capable of independent thought) and did the bidding of such entities due to their own lack of size and strength.[4]

As messengers, they were loyal servants that, despite their massive workload, rarely failed to deliver their letters or properly memorize various missives.[4] Their small stature allowed them to skulk around in enemy bases, making them useful as spies, and their willingness to obey and inability to recognize monetary value made them effective couriers and trustworthy enough to run errands.[7]

Because they often flew throughout the Nine Hells, spinagons served the dual role of indirect sky scouts and sentries.[2][4] If not performing espionage or delivery, they acted as skirmishers and aerial artillery in Hell's legions, attacking in mobs to compensate for their relative weakness.[1] Even if not working within an actual army, they formed bands of screeching marauders that savaged any potential prey they came across.[2]

Despite their wide variety of uses, most baatezu held nothing but contempt for the spinagons due to their lack of strength and skill. Fortunately for the spinagons, any wise employer was forced to treat them with some semblance of respect. For one, the verminous creatures were the eyes and ears of Hell, so there was no telling what they had heard or seen. For another, it was their primary responsibility to herd the lemures and nupperibos into their hordes, a circumstance that both allowed the spined devils to vent their impotent frustration on the few inferiors they had, and that meant they couldn't be treated too badly if an infernal master wanted their forces assembled with haste.[4][7][3]

The speed with which a baatezu's armies were marshalled was an important signifier of status, meaning that important figures had their legions first and minor individuals got theirs last. Because of this, spinagons serving under middle-class baatezu often found themselves under heavy pressure to quickly assemble armies for the benefit of their masters. This pressure also came from the fact that spinagons in particular received promotions based on the rating given by their masters.[4]

The station of spinagon was the first in which a devil had to learn a lesson, since it was the first time it had some determination over its fate.[10] Through this method, spinagons serving under a gelugon or pit fiend could find themselves suddenly at the status of hamatula or amnizu depending on their track record so far.[4] The most likely promotion, however, was that of an abishai, with those that showed a noticeable lack of ambition undergoing the worst "promotion" possible, the form of a black abishai, which indicated that the former spinagon wasted its potential.[10]

Some spinagons underwent a ritual to turn the natural combustion of their spines into magical flames instead. Using their spines once magically enhanced drained their life force for each quill fired. Those with the magical enhancement were a darker shade of red than their kin.[15]

Because spinagons had to be constantly at their masters service they only slept in hour long sessions multiple times every day.[15]

Several spined devils guarded Zeeahd during his quest to find the Abbey of the Rose. In this instance, they hid inside the skins of cats, coming out only when bid by Zeeahd.[16]

A spellcaster fighting spined devils on the roofs of Waterdeep. 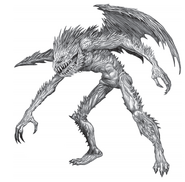 A spinagon from Wizards Presents: Worlds and Monsters.

A spined devil with its wings outstretched.