Edit
This article is about the weapon. For the specialty priest of Cyric, see Sword of Cyric.

A sword was a melee weapon that in its simplest form consisted of a blade and a hilt. This definition includes those weapons that fit the archetype of blade with the additional restriction of a minimum size. For game purposes, weapons are divided into three size/weight classes: light, one-handed, and two-handed.[2] All swords are in either the one-handed or the two-handed class (or both) with the exception of the shortsword which is classified as a light weapon. It is included here mainly because of its widespread use and because it is used by smaller races in the same fashion as the other swords are used by larger races.

The sword was one of the most common weapons used in Faerûn. They were wielded by knights, soldiers, and creatures of many realms. Swords came in a great deal of varieties, some of the more common are:

It was not uncommon for swords, especially enchanted ones, to have names, usually reflecting their origin or abilities. The most famous swords were those wielded by gods or heroes. These blades usually possessed considerable magical power. Some examples included:

The Crownblades of Cormanthor
Feyduster
A short sword enchanted with faerie dust.
Godsbane
The avatar of the deity Mask.
Icingdeath and Twinkle
The scimitars of Drizzt Do'Urden.
Khazid'hea
A magical sentient sword used by Dantrag Baenre (Deceased) and Catti-brie Battlehammer.
The elven Moonblades
Weaveshear
The longsword of Erevis Cale, weapon of the First Chosen of Mask.
Carsomyr
A powerful Holy Avenger from the game Baldur's Gate II: Shadows of Amn.
The Silver Sword of Gith
The first and most powerful of all silver swords (Demon Stone, Neverwinter Nights 2, Neverwinter Nights 2: Mask of the Betrayer). 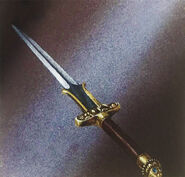 An enchanted sword vs the undead from Spellfire: Master the Magic.