The Sword Coast North was a region on the northwestern coast of Faerûn.[1]

The region stretched from Waterdeep[3] in the south to the Spine of the World in the north, and from the Sword Coast in the west to the Long Road in the east.[1]

The first great realm to appear in the region known as the Sword Coast North was that of Illefarn. The kingdom of Illefarn was a contemporary of Netheril, consisting of both dwarves and elves. Illefarn survived the Fall of Netheril, until the elves left for Evermeet. Northlanders and other humans began migrating into the region a few years before 1 DR.[5]

The region as seen in the Hero of Neverwinter game 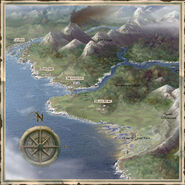 The region shown in Neverwinter Nights 2.
Add a photo to this gallery

Retrieved from "https://forgottenrealms.fandom.com/wiki/Sword_Coast_North?oldid=522960"
Community content is available under CC-BY-SA unless otherwise noted.