If they are so primitive, how can they hold such a large enclave and city like Surkh? In wich source is it stated that they are primitive? All I read about them seems that many of them live in smaller tribal societies and mor connected to nature, but that's the same with many humans. Historicus 08:54, 4 March 2009 (UTC)

No objections. The adjective seems subjective. They are often described in-universe as primitive, but this seems to be, as you point out, more of a result of cultural tendencies rather than actual inferiority to humans. This is probably a hold over from earlier pre-3e where savage humanoids were considered actual savages, rather than simply "primitive." I think the adjective is still useful for describing lizardfolk cultures, but it is likely unnecessary and unhelpful for the race as a whole. Niirfa-sa 10:20, 4 March 2009 (UTC)

I don't know if it's been explained for lizardfolk, I don't recall it coming up when I wrote the article. A search of the wiki shows that kobolds are cold-blooded. — BadCatMan (talk) 05:54, August 13, 2019 (UTC)

There's also the dire wolf, and I think the branta might count. Otherwise, you could look in Category:Creatures found in cold climates. But the ice age megafauna don't usually get the same attention as dinosaurs and monsters, so they don't have the same presence. — BadCatMan (talk) 09:52, August 13, 2019 (UTC)

The old Monstrous Compendium Volume Three Forgotten Realms Appendix (MC3) featured several "pleistocene animals" (not all of them from the "ice age", though): Axebeak, Baluchitherium, Megatherium, Phororacos, White Rhinoceros, Titanothere. So these seem to exist in the Realms somewhere. Supporting BadCatMan's argument, sadly most don't have an article yet. Daranios (talk) 15:03, August 13, 2019 (UTC)

Great! One more question — on The Witcher’s Continent, there are two distinctly looking races, vrans (basically Lizardfolk) and werebbbubbs (little beaver-like humanoids). What I mean to ask is if there is any race like werebbubbs in this world? Originally I looked through the Races category but after stumbling on myconids I realised not all humanoids are necessarily in that category so I thought I’ll just ask :) – Juraj103 (talk) 15:15, August 16, 2019 (UTC)

Personally can't think of any analog. Quaggoths are optically a bit similar, but that's it. So is the hybrid form of a werebadger, and these are at least small, but still not at all nice. Daranios (talk) 17:44, August 16, 2019 (UTC)

Werebbubbs (bobołaks) are essentially bugbears: they're both hairy humanoids, which make good hunters. Both bugbears (English) and bobołaks (Polish) are variants of the same folklore creature, the "bogey man". See a couple of images below: ~ Possessed Priest (talk) 19:35, August 16, 2019 (UTC) 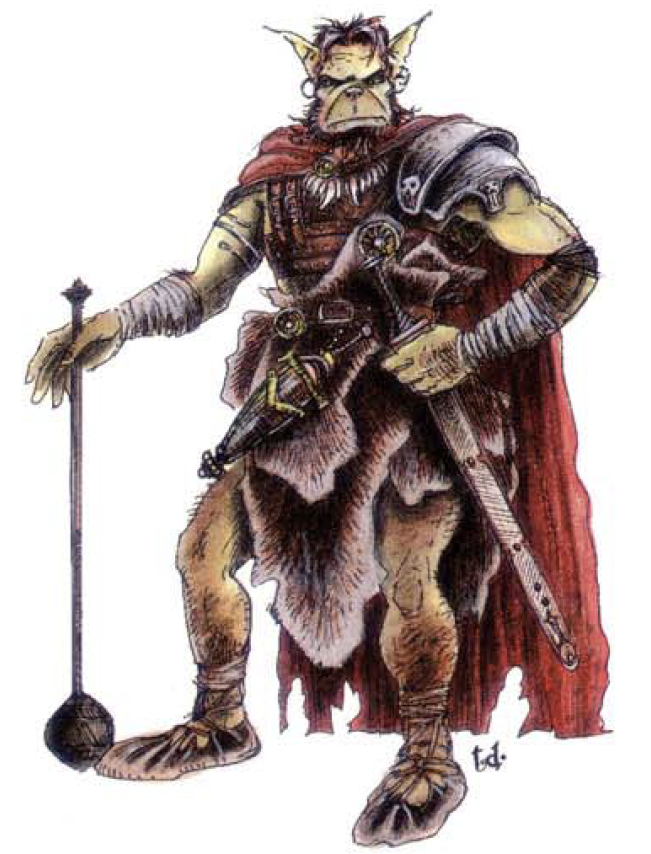 Been sometime guys but now with corona striking all around and the quarantine, lots of free time allow for pondering about fantasy :P I do acknowledge a great many hours and toil you put into articles so I'm in no way pressuring you but after reading about bugbears for my campaign I wonder: is all that's know in their article? If no I can wait afore creating a bugbear hero. Just to be sure :) Juraj103 (talk) 13:28, March 16, 2020 (UTC)

Hi again Juraj. Glad you have some time to ponder over the Realms!
There's a decent amount of information in the bugbear article, but it could certainly do with some love, care, and expansion. That said, there is more than enough info to get you started on creating a bugbear character. By the way, there is almost always more content and information that can be added to any article! If you want more information on bugbears or creating a bugbear hero, I'd advise looking through the Monster Manual 5th edition for some flavor, and Volo's Guide to Monsters for abilities and race traits. ~ Possessed Priest (talk) 13:37, March 16, 2020 (UTC)

Acquired the sources you suggested, they're great and I much appreciate it! I've got this idea for my bugbear but would first rather ask if it's "canonically" possible: bugbear riding a mammoth? In Volo's bestiary I read they aren't above mounting elephants so... – Juraj103 (talk) 07:50, March 17, 2020 (UTC)

I suppose it's possible, but I've never heard of such a thing, and it would be super rare. I also don't know what campaign you're playing: the location, the level, etc. Mammoths are powerful and only inhabit specific areas (such as the High Ice) and had to be trained from a very young age (they'd rather die than become a mount). If you're not running the campaign yourself, ask your DM. ~ Possessed Priest (talk) 14:19, March 17, 2020 (UTC)

Retrieved from "https://forgottenrealms.fandom.com/wiki/Talk:Lizardfolk?oldid=533699"
Community content is available under CC-BY-SA unless otherwise noted.