Three teardrops in a triangle

Barrens of Doom and Despair

Flickering brown and yellow radiance
Talona (pronounced: /tɑːˈloʊnɑː/ tah-LO-nah[2]), called the Lady of Poison, Mistress of Disease, and Mother of All Plagues, was the goddess of poison and disease. Talona was depicted as an old crone who brought misfortune and death.[2] On the other hand, she could also be depicted as a beautiful and innocent woman.[18]

Talona appeared as a gaunt, 10‑foot (3‑meter) human female with long, unkempt hair and reaching, elongated fingers. Her depictions in religious texts portrayed her as a withered crone with a scarred, tattooed face. The bodies of her avatars seemed like they had been beautiful and voluptuous at one point, but their frames and charms had been ravaged by the march of time, horrific diseases, and starvation. Even so, Talona's dancing movements were said to be alluring, and her lips were nonetheless inviting and gentle.[4]

Talona was a strange goddess in terms of personality. She had been compared by sages to a greedy and petulant child, switching between the juvenile desire for attention at any cost to the aloofness of a discarded paramour. Curiously for a deity so closely tied to death, she had no personal taste for violence.[4]

Talona's realm was known as the Palace of Poison Tears. Under the Great Wheel cosmology, it was located in the jungle-covered orbs of Cathrys, Carceri's second layer, known for its poisonous vegetation.[4][19]

Under the World Tree cosmology, this realm was located in the Barrens of Doom and Despair.[20]

Prior to the Time of Troubles, Talona was a servant of Bhaal and had a heated rivalry with her fellow servant Loviatar.[21] During that time she was often teased and tormented by her. Mocked for her appearance, the size of her portfolio, and her small number of followers.[22] She would occasionally provide aid to adventurers of good alignments if she viewed their goals as something that would damage Loviatar's reputation.[4]

Circa 1369 DR, she developed an alliance with the deity Shar.[4]

Her priests, known collectively as Talontar, typically wore ragged gray-green robes. Though they would wash these vestiments, they would never repair them. Older and high-ranking members of her priesthood tended to either ritually scar or tattoo their bodies all over. When embarking on a battle or dangerous adventure, a follower of Talona would often don armor of a black and purple hue that was adorned with a variety of spurs, horns, and spikes.[23]

Her followers often sold various poisons, antidotes, and medicines. When not doing so they were known to travel across Faerûn, seeking out new diseases or afflictions while also spreading rumors about Talona in hopes of boosting her reputation.[17]

Talontar devoted much of their lives to building up an immunity to various diseases and poisons, by means of both inoculation and magic. Because of this often treated those afflicted with diseased or buried their bodies. They also tended to be hired by paranoid members of high society, such as wealthy merchants or rulers, to test their food for any poison.[17]

The House of Night's Embrace was Talona's largest church in Faerun and was located in Tashluta.[24]

In −33 DR,[25] a demipower named Kiputytto tried to challenge Talona for her portfolio. The conflict that ensued devastated the nation of Asram with terrible plagues, forcing its citizens to provide Talona devotional power in hopes that she would lessen the plague's effects.[4][26] Talona ultimately won the conflict and shortly afterwards murdered Kiputytto. In the years that followed, texts would be written that referred to the latter deity as an alias of hers, further cementing Kiputytto's defeat.[4]

During the Time of Troubles, a formula to the concoction known as the Chaos Curse was indirectly given to the evil wizard Aballister Bonaduce by an avatar of Talona.[27][17] 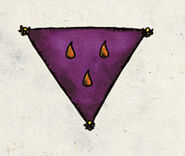 The symbol of Talona on a banner.

The symbol of Talona on a potion bottle.