Forgotten Realms Wiki
Register
Don't have an account?
Sign In
Advertisement
in: Articles in need of citations, Locations, Geography stubs,
and 6 more

Tarkhaldale (pronounced: /ˈtɑːrkhɑːldeɪl/ TARK-hal-dale[2]), also known as the Lost Dale and the Lost Vale, was considered one of the dales in the Dalelands,[3] despite being located between Anauroch and the Desertsmouth Mountains.[4] It was generally unmarked on maps, but was located west of Shadowdale.[citation needed]

In ancient times, Tarkhaldale flourished as a farming and mining community. When the Anauroch desert spread, the region was abandoned to orc and goblin tribes. In 1360 DR, a group of saurials escaped from their imprisonment by the god Moander and made their home in the dale. Later, the Netherese drove the saurials away and took over the dale.[1]

Map of the Lost Vale.

Map of the region showing the location of Tarkhaldale. 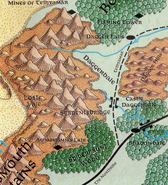 Map of the region showing Tarkhaldale labeled as the "Lost Vale".