Thazienne Uskevren was the daughter and second child of Thamalon Uskevren.
“
Perhaps I will find my way back here one day and I will put a stop to your slavery once and for all.
”
— Thazienne Uskevren to Szass Tam[5]

Thazienne's right wrist was scarred by a dog attack that happened when she was a child. She kept the wound a secret until it got infected. Her mother, Shamur Uskevren, asked the healer to leave the scar as a reminder of Tazi's foolishness.[6]

In 1373 DR, she received a mark of Szass Tam on her left shoulder, the symbol of interlocking arms, one human and one skeletal. The mark bore magic that gave Thazi thee ability to lead an army of Juju zombies. The magic tattoo was damaged in the following battle with Eltab and remained on her faded to almost a smudge.[5]

She was a highly spirited individual who enjoyed living a dangerous life.[7]

Erevis Cale was once in love with her but she remained unaware of it until much later.[8] She often associated, without the knowledge of her family, with individuals in the underworld of Selgaunt.[9]

Thazienne was naturally apt at breaking wild horsees in. She joined her brothers in taming wild beasts, common practice among Sembian nobility, as soon as she was old enough to ride a steed.[2]

For a period of time, Thazienne's abilities were enhanced for her to seize control of an army of blooded ones. She survived the ritual that increased her strength, agility, given her somewhat feral rage, and granted her innate knowledge of the orcish language.[2] 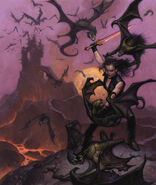 Retrieved from "https://forgottenrealms.fandom.com/wiki/Thazienne_Uskevren?oldid=624777"
Community content is available under CC-BY-SA unless otherwise noted.