Sword Coast
The Way Inn was a famous landmark on the Trade Way. It stood roughly 100 miles northwest of Dragonspear Castle or 100 miles south of Daggerford.[1]

The proprietor of the inn was Dauravyn Redbeard.[1]

The Way Inn was a large walled compound on the western side of the Trade Way atop a grassy plateau. Cart paths led up to three bridge capable of pivoting and dumping intruders into spiked pits below. The bridges led to three large gates with gatehouses. Each gatehouse was the size of a small keep and armed with a catapult on the roof capable of firing flaming missiles from the inn's firewood supply. [1]

The inn itself was made of stone with a tile roof and topped with a lookout tower armed with crossbow devices dubbed airhurlers. The windows of the inn looked out over the road.[1]

The stable were located in a corner of the compound with more airhurlers on the roof and fenced in paddocks around them. There were many stone houses along the western wall that where the residences for the staff with corresponding ancillary business of the inn. These business included an apothecary, a trading post, a trailwares shop, a smith, and a wagon repair shop. A small orchard and gardens were also located within the compound.[1]

The inn had a standing guard of twenty-one warriors, ten of which were usually on patrol on the edges of the High Moor.[1]

In 1363 DR an ancient black dragon[2], alongside the hordes of Dragonspear Castle, leveled the structure and the surrounding village.[3]

A year later the inn was rebuilt, though the rest of the village was not. This rebuilding effort for the fortified inn was sponsored by several merchant families based in Waterdeep.[1]

A map of the city. 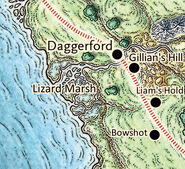 Map of the surrounding area, circa 1489 DR.
Add a photo to this gallery

Retrieved from "https://forgottenrealms.fandom.com/wiki/The_Way_Inn?oldid=560745"
Community content is available under CC-BY-SA unless otherwise noted.