Forgotten Realms Wiki
Register
Don't have an account?
Sign In
Advertisement
in: Inhabitants with a 13 challenge rating (3e), Inhabitants, Red dragons,
and 10 more

Chaotic evil
Themberchaud, titled the Wyrmsmith of Gracklstugh, was an adult red dragon allied with the duergar of Gracklstugh in the Northdark of the Underdark in the 14th and 15th centuries DR.[4][2][7][5][6][3] His other titles were the Father of Flame, the Everburning, and the Foundry's Heart.[1]
“
Gartokkar, you didn't say l was having surfacers for dinner today.
”
— Themberchaud, on receiving visitors[1]

As the Wyrmsmith, Themberchaud used his fire breath to heat the city's great forges and temper the famous steel blades manufactured by the gray dwarves of Gracklstugh.[4][2][3] He went about the city on a regular basis.[3] In turn, they paid him regularly, adding to his treasure hoard.[4][2]

He was attended to by the Keepers of the Flame, a monastic order of psionic duergar priests.[4][2] They obeyed his every whim, or at least those that fell within the terms of the pact between the dragon and House Steelshadow.[4] This included defending his hoard while he was away working at the forges. They kept him happy, rich, and fat on the city's more disobedient slaves[2][3] and guarded the entrance to his lair from a nearby guardhouse, though few would dare trespass in the dragon's lair.[1] He simply ate those who entered without the Keepers' permission.[8]

Much like many red dragons, Themberchaud was prideful and vain, and his ego was so big that he considered it impossible that someone would not agree with his orders. When someone did, he simply burned them and carried on as normal. Although well pampered by the Keepers, he was growing discontent with his lot.[1]

Massive even for a dragon, Themberchaud was visibly overweight. He had scales as red as lava and bright yellow eyes.[1]

Themberchaud was hatched within his chamber in Gracklstugh, and was a descendent of past Wyrmsmiths. From a young age, he was put to work lighting the city's forges as they had done before him. Eventually, he grew too big to ever leave the city.[8]

At some point, Themberchaud acquired a red dragon egg as part of his treasure hoard—it was unclear whether it was his offspring or a prize of conquest. However, the Gray Ghosts thieves' guild under Zunkhasp Saltbaron stole the egg and in a rage the Keepers declared war on the Gray Ghosts, opening hostilities between them and causing strife in the city by 1373 DR.[7]

“
And now I am far too large to ever leave. Even if I tore the entire place down around me, I could not claw my way to the surface from here. Instead, I remain buried in a prison of my parents' making, far beneath a sky I've never seen.
”
— Themberchaud's lament[8]

By the late 1400s DR, Themberchaud had grown stronger, restless, discontent with the limited gold and food supply, and more resistant to the Keepers' control, and had started getting ideas of dominating the whole city for himself. Themberchaud had been aware for some years that the Keepers were hiding things from him, yet elected to watch and wait before confronting them. While he paid closer attention to the city's affairs, he had begun trying to recruit personal agents outside the Keepers and looked out for capable mercenaries he could recruit as his agents.[3][1] He was unaware that, as had happened to past Wyrmsmiths, the Keepers planned to kill him before he became too powerful and replace him with a weak and pliable hatchling. But the Gray Ghosts once again stole a red dragon egg,[note 1] this one intended to hatch a new Wyrmsmith, and the Keepers became distracted by their renewed war on the thieves.[3][8] In response, the Keepers refocused their security around the dragon's lair and explored other options. They hired talented mercenaries within the city, but Themberchaud too would try to recruit them as his agents, while leader of the Keepers Gartokkar Xundorn would then interrogate them as to the dragon's intentions.[1][8] They may even have found recovered the red dragon egg, but whom they would return it to remains in question. If Themberchaud obtained the egg, he would destroy it to maintain his position.[9][8][note 2]

Themberchaud dwelled in a side cavern leading off from the southern wall of the main cavern of Gracklstugh, out of sight to visitors. He sat atop his treasure hoard there.[4][1] While he didn't allow visitors to come within 60 feet (18 meters) of him, let alone his treasure, and incinerated those who did, his hoard was estimated to hold almost 70,000 gp in platinum, gold, silver, and copper coins, six fire opals valued at 1,000 gp each, ten peridots worth 500 gp each, and thirty garnets of 100 gp each, as well as magic items like oil of sharpness in a gourd, a potion of flying, a potion of longevity, and a potion of supreme healing, those these were well buried under coins.[1] 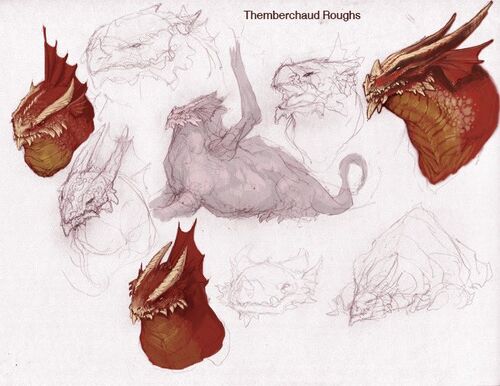