Naked, sexless, hairless
Claws that can dig through solid rock
Great toothed mouths in their bellies
Featureless heads
Thaalud, more commonly known as tomb tappers, were fifteen-foot tall intelligent constructs designed by the ancient Netherese empire to defend it against the depredations of the phaerimm. Their existence can be traced back to the very beginning of the Shadowed Age of Netheril's history, when a group of arcanists created them to seek out the source of the magical drain that was beginning to reach across Netheril.[3]

Tomb tappers were tall, naked, sexless, hairless humanoids with hard, smooth blue-gray skin, claws that could dig through solid rock, and great toothed mouths in their bellies. Their featureless heads earned them the nickname "the faceless."[3]

Tapper skin varied in porosity at will: through it, they took in needed water. Their jaws could crush rock to extract mineral sustenance. They could digest iron from blood and marrow if available, but they did not hunt to eat.[3]

They communicated by means of a humming sound created by skin vibrations (a language partially understood by mind flayers) and by 120‑foot-range (37‑meter) telepathy.[3]

Tappers saw via sonar (emitting inaudible sound much like a bat) that was accurate up to 440 feet (130 meters), making them susceptible to silence spells. This sense enabled them to locate invisibility and displaced creatures and objects, and it made them immune to visual illusions and other vision-related spells.[3]

Tappers could animate rock once every two hours and could detect magic at will.[3]

A tapper attacked with iron-hard, long-fingered hands that delivered massive damage, and it also hurled itself atop opponents to bite with its abdominal mouth (crushing and tearing armor, rock, and bone). If it didn't want to close with opponents, it used a great hammer. A tapper could wield this weapon one-handed and throw it with great accuracy.[3]

Tomb tappers received their name from their habit of burrowing into the depths to plunder tombs, temples, and caves in search of magic items, which they carried off. They usually tried to seize magic from beings that they encountered. Magic was sacred to a tomb tapper; they never used any magic gained, instead choosing to protect and venerate such items. Tappers spent their long lives in the search for "The Source of All Magic", which they believed to be hidden deep in the earth. They were in awe of earth elementals, believing them to be created at this mysterious source, and were reluctant to attack them.[3]

Tappers kept all magical items they found as treasure (owned by the clan as a whole). They guarded these watchfully. As personal treasure, they kept pretty rocks. These were stored in caverns of glowrock in the utter depths.[3]

They wielded great, 10-foot-long hammers of arenite, a magma alloy harder than most rock. Tappers could dig through rock with their claws, but used their hammers to split rock when a smooth surface was desired.[3]

Tomb tappers were created during the war between the Netherese and the phaerimm.[4] Wrought from the fusion of magic, elemental earth, and the bodies of nine volunteers from the poor districts of Netheril, the archwizards created the first thaalud (tomb tappers). These faceless warriors were given a lust for magic, an inherited memory (giving access to the recollections of their ancestors), an ideology of the purity of magic, and an insane hatred for nonhuman spellcasting creatures.[3]

Their union with elemental earth turned the thaalud into ground-dwelling beasts—delivering them into the realms of the phaerimm (the Netherese had no idea as to the source of the magic drain spells at the time they created the tomb tappers). Nevertheless, their plan succeeded.[3]

During the tappers' excursion into the deep earth, they ran afoul of mind flayers, umber hulks, drow, and duergar. Because of their incredible recollection, the actions of these races have not been forgotten... or forgiven. Their primary enemy, though, was the phaerimm, whom they attack over all other targets.[3] 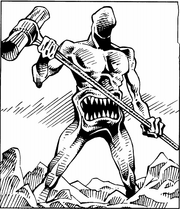 The cover of Dungeon #180.
Add a photo to this gallery
Retrieved from "https://forgottenrealms.fandom.com/wiki/Tomb_tapper?oldid=604927"
Community content is available under CC-BY-SA unless otherwise noted.