Trolls were a ravenous, predatory species of giant humanoid found throughout almost all the regions and types of climates in Faerûn,[6] from arctic wastes to tropical jungles,[7] and came in several sub-species. They were uncivilized,[1] monstrous creatures with voracious appetites that roamed from one area to the next feeding upon whatever they could.[8] While some classified them as giants,[9] trolls had no confirmed relation to either Annam All-Father or Othea and did not qualify as either true giants or giant-kin.

A typical adult troll stood around 9 feet (2.7 meters) tall on long, ungainly legs.[6] Some trolls grew even larger and these were referred to by some as fell trolls,[2] (not to be confused with the two-headed trolls with the same name.) Their deceptively thin bodies had thick, rubbery hides colored in shades of mossy green or putrid greys, and possessed long hanging arms that ended in massive claws. The skull of a troll had a messy, hair-like growth colored black or steel grey.[6] Females were typically larger, and more powerful, than males.[7]

Although they walked upright, trolls possessed a severe hunch, which caused the backs of their hands to drag on the ground. When they ran, their arms dangled still. Despite their awkward physical appearance, trolls were surprisingly agile and were well adapted to be masterful climbers.[7]

Most trolls were not overly territorial, except with their own kind.[10]

Troll senses were unbalanced. They possessed poor hearing and a sensitivity to light, but superior olfactory senses.[7]

Perhaps the most well-known factoid of trolls was their infamous regeneration. Whether a slash in its rubbery hide, or a dismembered limb, trolls could rapidly heal through most wounds. Only acid or fire could arrest the regeneration properties within a troll's flesh.[1] Dismembered limbs would continue to attack at opponents even after being severed.[7]

Because of the regenerative properties of troll blood, it was extremely valuable. The blood that could be extracted from one troll was worth upwards of 400 gp. This green viscous liquid was used in the manufacture of poisons, antidotes and certain potions of healing.[7]

Due to the adaptive nature of their physiology, trolls were especially susceptible to mutation. Although it was uncommon, actions taken throughout a troll's life could result in a physical or behavioral change, within the same generation.[1]

When in heat, trolls exuded what was called "mate-rut" a foul-smelling to other species odor that signaled other trolls they were ready to breed. Experienced adventurers could recognize the smell from a distance.[11]

Trolls hunted most other living creatures and were never concerned about the size or number of their prey.[8] They had absolutely no fear of death.[6] In combat, they flailed wildly with their clawed hands and used as a fierce bite, but seldom wielded weapons. On occasion they would throw large stones before closing the gap with their prey[7]

Trolls had little in the way of society.[1] They traveled in non-migratory clans of 3-12[7] and, upon discovery of an area rich with prey,[8] would establish a lair, most often within a cave. They were often located near smaller human settlements, including established roads as those who traveled off the path served as a great source of food.[8] Once established within a region the band of trolls would hunt and devour as extensively as possible until all resources had been exhausted.[8]

Although they could be encountered nearly anywhere, trolls were most often found in dense forests and subterranean locales,[7] including the Underdark,[10] and fed on whatever they get could rend with their claws.[8]

Trolls were commonly found in a large number of areas that earned their name based on their populations, such as the Troll Mountains in Amn[22] and the similarly named Troll (or Trollcrag) Mountains in the Vast[23][24] as well as the Trollbark Forest.[25]

Larger species of trolls, such as those found in Halruaa, and a species that were common in the areas surrounding the Sea of Fallen Stars,[13] preferred mountainous areas.[16] A large, muscular type of troll was also found in the Utter East's Serpent Valley and Web Mountains; wielding massive clubs, they were territorial and typically guarded bridges and huts.[26] The smaller varieties tended to live more in the forests. The trolls of the Chondalwood, colloquially known as muskwarts were expert hunters within the region,[15] while the small and stealthy tree trolls originated from the Evermoors. Conflicts with giants caused their migration into the High Forest, where they fought against fey creatures such as pixies.[18]

Troll dens were filthy places, led by a matriarchal shamanistic female.[7] This female-led dynamic extended into their faith as well, as each clan attributed their founding to an ancestor known as a great mother, which they believed was a daughter of the ogre-deity, Vaprak.[9]

Trolls had no language of their own, but spoke giant[6] and "trollspeak", a guttural mix of common, orcish, goblin, and giant.[7] Any culture they possessed was passed down orally, usually kept within a single clan. Communication was often simple assertions for dominance or a mating female presenting a kill, along with a shared meal, to a prospective male.[10]

Trolls and had no natural predators in the wild.[10]

Though they were extremely difficult to tame, trolls were known to serve as mercenaries for more intelligent monstrous humanoids, such as ogres and giants.[1]

Although they didn't fear humans when encountered, they respected them as a group that were known to wield fire, a weakness of theirs.[7]

A wizard Huhhus developed a distilling process that could turn troll flesh into foul smelling and tasting potion of regeneration that was considered a failure due to no one wanting to actually consume that. Decades later, one of the wizard's students built upon Huhhus' work and developed a successful and profitable recipe to create rings of regeneration using troll's ichor and brain.[27]

The origin of trolls was uncertain. However, if the trolls' legends were true that they originated from a number of daughters of Vaprak,[9] and if it was true that Vaprak was a son of Annam through the magical rape of an ogress enchantress,[29] then trolls were indeed descended from Annam All-Father as were other giants. The trolls also believed that they descended from a dark and primal Earth Mother.[9]

Icon of a troll from Blood & Magic.

A club-wielding troll in the Serpent Valley from Blood & Magic.

Deepspawn and its trolls under the Hellgate Keep. 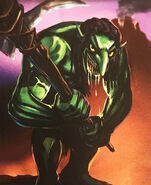 A hungry troll is a dangerous troll. 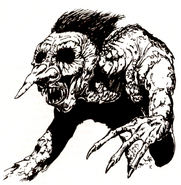 A troll from 2nd edition.

One of the shaman trolls, weaving a spell. 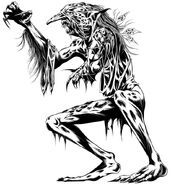 A depiction of a troll] from Adventures in the Forgotten Realms.

A depiction of a troll] from Adventures in the Forgotten Realms.