The Tun Marshes, also called the Marsh of Tun, was a swamp lying in the Tunlands between the Sunset Mountains and the Stormhorns west of Cormyr in interior Faerûn.[1]

Originating in the Farsea Marshes, the Tun River flowed south with few bends.[2] The middle portion of the Tun River bogged down into the low and densely vegetated Tun Marshes.

The region was home to many creatures both magical and mundane. But unlike the northern Farsea Marshes, the Tun Marshes were not populated by the same races of sentient beings. Instead, it was home to the black dragons who laired there and the various lizardfolk tribes.[1]

Few reputable humans called it home. Those who did were the Tun Bandits. The Tun Marshes held a substantial bandit population in the mid–14th century DR, last recorded at or around 1000 bandits. The bandits, mostly human in racial identity, were outlawed refugees fleeing the justice of Cormyr.[1] 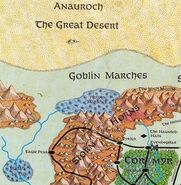 Marsh of Tun, circa 1367 DR
Add a photo to this gallery

Retrieved from "https://forgottenrealms.fandom.com/wiki/Tun_Marshes?oldid=457000"
Community content is available under CC-BY-SA unless otherwise noted.