Turn undead is a channel divinity cast by nearly all clerics. When a cleric casts turn undead he or she pushes any undead within a nearby area of five feet in radius back at least fifteen feet, perhaps further depending on the cleric's strength of personality. Undead caught in the blast are momentarily paralyzed or, at the very least, seared by the severe light of the prayer.[2] 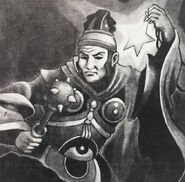 A cleric dangling his holy symbol to turn undead.