The Labyrinth of Life
The Forbidden Plateau, Krigala

A vision of a placid Chultan male's face
A thunderous roar
Ubtao (pronounced: /uːbˈteɪoʊ/ oob-TAY-oh[1]) was the patron deity of Chult. He was also known as The Father of the Dinosaurs, Creator of Chult, Founder of Mezro, and The Deceiver. He stayed distant from both mortals and other deities, and he seemed to be above the daily doings of the world and his followers. This might have been partly due to his origin as a primordial,[2] and in fact it was not fully known if he was a deity in the traditional sense. Only since the Time of Troubles had he begun to show interest in his followers again.[1]
“
The world is a labyrinth, and the true followers of Ubtao know the pattern that represents their life. When they die, they must recreate that maze, spell out their past for me. To be a paladin of Ubtao, a bara of Mezro, you must know more. You must complete the maze long before you die, look ahead to the pattern that will be your life in the years and decades to come.
”
— Ubtao to Artus Cimber[10]

When Ubtao showed his form to mortals, he appeared in the shape of a powerful Tabaxi human male with dark brown skin, short cropped black hair, trimmed goatee, and distant look in his dusky eyes. The age of the avatar was hard to pinpoint as he appeared ageless. The color of his skin symbolized bark brown fertile earth of his jungles.[8]

Some sages speculated that Ubtao was worshiped as Haaashastaak, the Master of all Lizardkind, in the southeastern Faerûn. Despite numerous similarities between the two deities, a few scholars believed that Haaashastaak was an aspect of Sebek, a minor Untheric crocodile god.[3]

Ubtao main personality trait was his endless patience and lack of emotions. He projected detachment and promoted wisdom. Unlike many of his peers, Ubtao showed little involvement and interest with the daily activities and lives of his followers. He showed same detachment towards dealings of other gods.[8]

Ubtao's main divine realms bore the name of the Labyrinth of Life, a massive labyrinthine jungle in the Outlands of the Outer Planes. He also created a realm for his favorite children – dinosaurs. The realm of the Forbidden Plateau was located in the Beastlands. Ubtao could often be found in the Plateau when he needed seclusion from his human petitioners. In that domain, Ubtao took on a shape of a free-roaming tyrannosaurus rex.[8]

Ubtao was considered to be the leader of the Chultan pantheon, despite the fact that he was the only power within it. Other being worshiped by the Chultans: numerous spirits of nature, minor gods, and the essence of the Chultan jungle – all were various aspects of Ubtao.[8] Due to this he only had power in and around the jungles of Chult.[1] Those who inhabited Chult and worshiped Ubtao considered dinosaurs to be "Ubtao's Children." The dinosaurs however were not intelligent enough to worship and venerate their creator.[8]

Because of Ubtao's distance to the other deities he had only few allies: Thard Harr, the Lord of the Jungle Deeps and the protector of wild dwarves,[11] and Corellon Larethian of the elven pantheon.[12]

His biggest foe and antithesis was Eshowdow, born from Ubtao himself. Due to the nature of Eshowdow, Ubtao was incapable of perceiving the Shadow Giant and could do very little to protect his domain and devotees agains the dark antithesis.[8] He had only one other enemy: Sseth, the Great Snake, a deity of yuan-ti and an aspect of Set. Together with Thard Harr, Ubtao opposed the snake god and his yuan-ti who sought to enslave both people of Chult, the Tabaxi and the [wild dwarves.[8]

With imprisonment of Dendar underneath the Peaks of Flame, Ubtao forged an ancient pact with the deities of Faerûn. He was granted the exclusive domain over human inhabitants of the Chultan Peninsula and as long as he guided Dendar's prison, members of the Faerûnian pantheon were to refrain from expanding their influence in that part of the world.[8]

The Church of Ubtao was split among three wholly independent sects, all based in the jungles of Chult among the various clans of the humans.[citation needed]

Being a virtually monotheistic society, Chultan humans and their dominant ethnicity – the Tabaxi, worshiped Ubtao since the early days of the deity's existence.[8]

Mazewalkers were found only in the city of Mezro. They took care of the general spiritual welfare of the clan, and tried to prepare the faithful for their trek through the maze of life. They taught the history and lore of Chult to both children and adults. Mazewalkers also provided council about important life decisions, such as marriages. They were the mediators when disputes broke out between and among clans, and they were the caretakers of Mezro's laws. Mazewalkers were usually clerics.[citation needed]

Spiritlords lived outside the city and sought to ensure a safe passage for their clan through the spirit-infested world. Their main goal was to ensure the clan did not offend ancestor spirits or elemental deities by missing sacrifices and rituals. They also aimed for favors from the spirits. Spiritlords were usually adepts.[citation needed]

Jungle druids taught the clans to fit in as best as possible into the web of life in the jungle. Most of the time they functioned as clan healer. Outside this they also collected and taught knowledge about plants, animals (including dinosaurs) and their behavior. Jungle druids also trained the very few domesticated animals kept in Chult. Jungle druids were, as the name suggests, druids.[citation needed]

The Spearbearers of Ubtao made it their duty to protect the world from Dendar. Their goal was to give Ubtao the necessary strength to defeat the Night Serpent when she finally came to eat the sun. Towards that end, they conducted a large number of rituals, many of which involved sentient sacrifices.[13]

Both clerics and druids prayed for their spells at noon, when Ubtao's majesty hung over all of Chult. There were scores of ceremonies and holy days, most particularly to dead ancestors. Many of these rituals were necessary before performing certain activities, such as hunting special animals or burials. The small, moveable stone altars which were used for these ceremonies were treated just like any other rock in the jungle when they were not otherwise in use.[citation needed]

Chultan followers of Ubtao used gravestones and grave markers to bury their dead. When such a thing was unavailable, following a death deep in the jungles, for example, a big flat surface, such as a large flat leaf, was used for a similar purpose. As with the tombstones, the people closest to the dead would write the perished soul's name upon the surface, and the others each would add a single word of praise. These ritual inscriptions were intended to serve as the deceased's introduction to Ubtao when the god arrived to claim the person's soul.[14]

Ubtao molded and shaped the land of Chult in the times primordial. However this act of creation was the reason for the god's distance from his land and his worshipers. To rectify that, Ubtao splintered his being into aspects – various spirits of the nature and land. The biggest part of his being became the essence of Chult's jungle, this fracturing of his divine power left him little time to directly affect and interact with his mortal worshipers.[8]

The creation of Chult's jungles and splintering of Ubtao's being had one unexpected result. The dark part of Ubtao's essence, a primeval antithesis, the shadow entity Eshowdow was born. Eshowdow, the Shadow Giant, or "Shadow of Ubtao", became its own separate divine being that strove to annul and repeal anything Ubtao created or accomplished.[8]

During the Shadow Epoch of the Blue Age,[2] when Toril was still a new world, the gods and the primordials fought for dominance. This Age came to a sudden stop when the primordial known as the Dendar the Night Serpent took the sun out of the sky. Eventually, the Elder Gods won the fight when the primordials were betrayed by one of their own: Ubtao the Deceiver.[2]

Ubtao made an agreement with the rest of the Faerûnian pantheon to guard the Peaks of Flame for the day when Dendar the Night Serpent would enter Toril and end the world. "She who gorges herself on all the unremembered nightmares in the Realms", Dendar, was said to be trapped behind a gargantuan iron door that sealed the Realm of the Dead and the serpent primordial away from Toril. As reward for this service, the other deities granted him sole control over Chult and agreed to leave his lands alone and never to spread their own religions there.[15][8]

During the Time of Troubles in the Year of Shadows, 1358 DR, Ubtao took on a form of a tyrannosaurus who hunted in the jungles of Chult. During the exile, avatars of Ubtao and Sseth the Great Snake clashed in a fierce battle in the eastern part of the jungles. Once the Godswar was over, Ubtao returned to the planes but he became more involved in the dealings within his church and expanded the number of clergy and his worshipers.[8]

As of 1372 DR, Shar had recently absorbed Eshowdow, and it was believed this activity might be the beginning of the end for the agreement between Ubtao and the rest of the deities.[15][8]

Sometime before 1400 DR, Ubtao abandoned Chult, allegedly because he had grown angry over his worshipers' infighting and on their overreliance on his assistance. Thereafter, his influence ceased to be felt among his Chultan followers, and yet, despite the spiritual void left by Ubtao's absence, the many warring tribes among the Chultans learned to unite as a people and set aside their differences. With Ubtao gone, many Chultans turned aside to other gods, including those introduced by foreign missionaries such as Waukeen, Gond, Savras, Sune, and Tymora.[16] 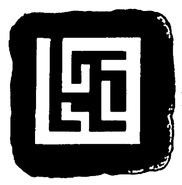 Another version of Ubtao's holy symbol.