Dark gray[4]
Ultroloths, (pronounced: /ˈʊltrəloʊθz/ UL-truh-lothz[6]) sometimes called ultrodaemons[5] or ultrodemons,[2] were the enigmatic rulers of the yugoloths, holding sway over their underlings through their fearsome reputation and crushing aura.[3] They were the epitome of yugoloth corruption, mysterious masterminds that would pull the strings behind any event to serve their diabolical plans and determined the victors of Blood War battles from the shadows.[2][7]
“
The faceless ultroloths (a more apt form than most folks realize) are some of the most feared creatures in the entire multiverse. Though solars and certainly powers are stronger, it’s said that few have longer reaches than the ultroloths, and fewer still can hide their knowledge from these ruthless fiends.
”
— The Unnamed[8]

Ultroloths appeared as faceless humanoids with their only features being their bulbous, ovoid eyes that resembled fire opals.[1][3][4] They were lithe and slender, standing roughly between 6‒6.5 ft (1.8‒2 m) tall and weighing 160 lb (73 kg) pounds. Their skin was a mottled dark gray, contrasting the coursing colors and swirling patterns in their eyes. Those not entranced by the colors were deceived by the ultroloth into viewing them as a subject they loved or admired. They had a distinctly alien appearance with greatly elongated heads, and without the benefits of a mouth, they communicated using telepathy.[3][4]

Most ultroloths wore robed cloaks or flowing capes as well as the severed fingers of their victims as materials for necklaces,[3][4] and apart from their fashion sense, there was no immediately apparent way to distinguish them.[8]

Ultroloths were schemers, manipulators, and plotters, holding no loyalty to anyone, least of all each other. They were constantly engaging in intricate intrigues, waging conspiracies and betraying those around them, including their own patrons. Their plots were designed only to further their individual power and wealth, and while they would never refer to themselves as "evil", they pursued perfection in all things and didn't care who had to suffer for them to obtain their personal ideal.[2][9] Despite garnering an infamous reputation for their continuous plots and wicked cruelty, they would undoubtedly join against a common threat regardless of previous disputes.[2][7]

Befitting their appearance, ultroloths were also utterly unpredictable, their alien minds seemingly exhibiting an existential paradox. They were filled with passion for their ambitions and deep hatred for their opposition, yet behaved detached and emotionless.[9][10] Although they enjoyed the act of destruction, they were also cerebral and secretive, guiding others into serving their own ends through vague hints and subtle messages as opposed to outright force.[7][2][4] While they might temporarily feign loyalty for an advantage, they would just as quickly bow to and praise a random mortal as they would a powerful extraplanar entity to achieve their inscrutable goals.[9]

Astute of mind, strong of will, and of crushing presence,[4] ultroloths considered themselves above the extremes of law and chaos,[9] and indeed seemed to be a contradictory combination of the two, existing as both controlled confusion and anarchic order.[10]

Ultroloths were dangerous spellcasters, possessing a slew of innate and learned magical techniques. In turn, only magical weapons and attacks were capable of harming them.[4] Their spell retinues were diverse, often contained spells such as symbol, invisibility, scorching ray, suggestion, and fire storm. Their sheer force of personality and personal willpower was enough to overpower most enchantments.[1][2][4] Their gaze had to hypnotize opponents, keeping them still and potentially creating the illusion that the ultroloth was an beloved figure.[4] They were excellent summoners and were purported to be able to call upon any yugoloth equal to or lower than their caste.[4] If forced to go into melee without a weapon their attack consisted of two hand strikes, their very touch inflicting energy damage.[1][4]

Ultroloths were tougher than their lesser kin, resisting non-magical cold, electricity and gases when other yugoloths would be vulnerable.[8]

Ultroloths often wielded swords and polearms, doing so with precision and skill. Such weapons were always enchanted to a certain degree, sometimes with special or extraordinary abilities like curses, and the ultroloths always took the steps to learn their weapons' full potential.[4]

However, this combat prowess was not often demonstrated, as it was very rare to see an ultroloth engaged in a serious melee fight. In fact for an ultroloth the ideal battle was one in which they did not have to engage the enemy at all, masterfully orchestrating the course of events behind waves of soldiers. While their allies formed a guard around them and fought directly, an ultroloth would use its mental powers to manipulate the course of battle, such as creating walls of fire to help front-liners or arcane symbols as a means of attack.[3]

Although all ultroloths could summon yugoloths, some were said to have mastered the art of summoning to such a degree that they could summon any creature on another plane, even the Material Plane.[5] If forced to engage in close quarters it was far more likely for an ultroloth to approach stealthily while invisible or disguised before trying to hypnotize foes, or make swift attacks before backing off.[3][2]

Any situation in which an ultroloth was personally engaging in combat as an equal or inferior was a battle that, in their eyes, they had already lost. In these cases, they would gather as many of their favored allies as reasonably possible before retreating with the expendable soldiers covering them. The only situation in which ultroloths in a losing battle did not retreat was if forced do by the circumstance or if such a confrontation was mandatory in order to realize their end goals.[2] When winning, ultroloths freely engaged in taunting and torment, basking in their victory while lingering over the fallen foes rather than quickly ending their lives.[3]

Ultroloths were the elite leaders in the yugoloth mercenary armies, roaming the planes with their fiendish legions.[3] When not actively under the employ of a Blood War participant, they ran their mercenary companies either like crime lords or commanders, keeping their underlings in line and staying aware of all that went on in the ranks.[1][4] Their services came at the cost of vast sums of wealth, sinister favors, or powerful magical items, and were available to all kinds of entities. Such deals were often lopsided and never binding, as an ultroloth would easily switch sides or end service if it was more profitable.[2]

The ultroloths acted as the great visionaries of the yugoloths, yet each had their own personal beliefs on how the race's goals could best be furthered.[8] The inherently competitive environment of Gehenna constantly had them fighting amongst each other trying to gain power with whatever means they saw fit.[3]

The actual power of the ultroloths was not all that much greater than others of their kind, but nonetheless, lesser yugoloths obeyed their orders without question or payment, not knowing the true capabilities of their rulers. Even non-yugoloths dwelling in the lower planes steered clear of them and they were possibly the most feared beings in the multiverse despite being outclassed by beings like the solars. Ultroloths were the masters of their race not because of sheer strength or magical ability but due to their greatest weapon; their reputation.[8][7][4]

Becoming an ultroloth required millennia if not eons of wicked service, and in that time an innumerable number of contacts and pieces of information were learned throughout ascending the yugoloth hierarchy. With contracts stretching even to the Inner Planes and Material Plane and unfathomable information at their disposal, an ultroloth could have access to planet destroying forces if they made the right moves.[8]

Only if an arcanaloth could find a way to discreetly dispose of a preexisting ultroloth could they ascend to such a status themselves, making it potentially the most competitive of the castes. The quantity of the ultroloths was unknown, and besides the Oinoloth position, there was no achievable status greater than that of the ultroloth. If an ultroloth did seek the role, the method was similar to that of reaching their current state, finding a way to overthrow the current keeper of the title. This method could be as brutish as an attempt to scale Khin-Oin and directly vanquish the Oinoloth or as subtle as somehow persuading the current Oinoloth to leave.[7]

Despite not having mouths, ultroloths were all-consuming carnivores, feasting on the body and soul of their victims. They devoured flesh and bone, joy and hate, pleasure and pain, until nothing physical or spiritual was left of their being.[8]

Ultroloths were known to sleep, or at least go into a period of inactivity, although what happened to them when they did so and what they did during that period was unknown. There were no active reports of an ultroloth being seen sleeping, they just disappeared for an entire day once each decade. Some speculated that they went to commune with the baernoloths or hid in secret towers safe from all but the treachery of their kind. Others believed that the ultroloths dispersed or tightly focused their forms to the point where they were no longer visible and had entered the metaphysical realm before riding on the currents of power on the lower planes.[8]

Ultroloths did not breed, but they did reproduce, spawning offspring asexually. However, ultroloths didn't produce young members of their own kind as one might expect, but rather arcanaloths. The reason for this, at least according to some sages, was that existence as an ultroloth was meant to be a reward and that no yugoloth could be born into the caste, but had to earn it.[8] 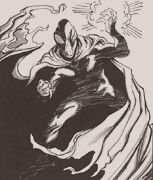 An ultroloth from the Monstrous Compendium: Outer Planes Appendix 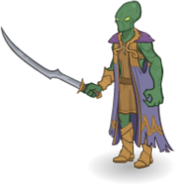