Underground[3]
Umber hulks were four-eyed monstrosities who lived deep under the earth. Their massive claws tunneled through rock with ease and their thick armor was as strong as full plate.[1]

Abominable monsters with horrifying physical aptitude, umber hulks easily smashed through any opposition between them and their quarry. They would then tunnel away, collapsing their exits behind them and leaving the survivors dazed and confused.[1]

“
Two big bug eyes, two little eyes that can almost make you think there's a brain behind those huge mandibles—it's confusing just to look at the thing. Never mind whatever magic lets it dig into your mind like its claws dig through rock.
”
— Elior of Harkenwold[6]

Umber hulks looked somewhat like a cross between a gorilla and a beetle.[3] Their most prominent feature was probably the huge pair of mandibles, each roughly 8 inches (0.2 meters) long and their mouths were filled with many rows of sharp triangular teeth. Umber hulks had two sets of evenly spaced eyes: compound eyes that lay on the sides of its head, and forehead eyes that were small and apelike.[7][3] They were extremely bulky creatures, often standing 4.5​ to ​5 feet (1.4​ to ​1.5 meters) or 8​ to ​9 feet (2.4​ to ​2.7 meters) tall. They were stout and had a highly muscular physique weighing 800​ to ​1,750 pounds (360​ to ​794 kilograms).[3][8]

Their bulk was covered in chitinous armored plates, tougher than steel, that laid over their hair-like feelers. In addition, their powerful arms and legs both ended in tough claws, able to rip through rock with ease. Rather than a nose, they had a series of gill-like openings in their almost non-existent necks, potentially due to aquatic origins.[8] Owing to their wide and heavy bodies, they couldn't properly maneuver in open spaces and ended up lumbering around when not traversing their tunnels.[7] As indicated by their name, their hides were mostly black, although their front was usually burnt brown or yellowish gray.[8]

Umber hulks were commonly viewed by other races as unthinking brutes. This was a misconception they were perfectly happy to propagate. Whilst not particularly intelligent, umber hulks were perfectly capable of rational thought and forward planning. Umber hulks normally had no need for complex plans, magic, numbers, or technology to accomplish their goals and so did not employ such things. If a situation warranted more than sheer force, they were intelligent enough to use their earth-shaping abilities to out-think an enemy.[8]

Umber hulks were solitary, not due to a hatred of one another but simply because working together had no perceivable benefit, as they could handle most threats individually. They preferred to stay underground, as there was no use in going above ground, and they disliked the light.[8]

Nearby beings that made eye contact with the umber hulk's smaller eyes would have their mind scrambled, causing them to wander in random directions, lash out at those nearby, or simply stand dazed and confused.[1]

Umber hulks fought only when hunting, and did so for the express purpose of gaining some material benefits. Mostly, an umber hulk was driven by a need for food and would target foes that it perceived as obviously weaker than itself.[8] They conducted raids on dungeons and settlements, but would only kill a few before leaving, so as to give the food source time to replenish. Using their feelers, they could sense movement around them and they would lie in wait around corridors and other crucial points waiting to strike. They might also create small holes so as to properly size up their options and pick the weakest target.[7]

Typically, after an ambush was sprung, an umber hulk would utilize its confusing gaze.[1] If the combination of ambush, power, and confusion failed to be enough, they would utilize a variety of tactics to escape, retreat, or recollect itself. They could cause cave-ins, lead enemies into dead ends, create circular paths, initiate floods, collapse tunnels they enter and exit, or create pitfall traps.[7][8]

Umber hulks were primarily solitary creatures and it was unknown if they had anything akin to a society of their own. There were rumors that they possessed underground cities consisting of web-like tunnels and that they stole precious metals to use as currency, although not all umber hulks valued precious metals. Although they were mostly solitary, some lived in clusters (groups of 2–4) typically comprising mothers and their young. They typically destroyed items they couldn't use, such as clothes and weapons, but curiosities that caught their eyes would be hidden within their lairs along with food items, hidden and guarded with simple earth-related traps. Their lairs were large caverns with the walls covered in claw marks, possibly due to claw sharpening, or from the fact the umber hulk made the cavern.[8]

Umber hulks spoke primarily in a brutal and harsh language of their own creation known as "Hulkish". It consisted of various hissing sounds and grunting noises combined with gestures, as well as eye, mouth, and mandible movements. This language conveyed limited ideas and so was easy to learn but very difficult to replicate by anyone but umber hulks.[8] If needed, some could also speak Terran and others could understand Deep Speech.[3][5]

Umber hulks did not have working relations with most other races, and were typically enslaved by members of other races. Neogi captured umber hulks and enslaved them, with young umber hulks being used as the first servants of hatchlings.[9] In addition, they could often be found dominated by illithids for use as dumb muscle, or enslaved by human spellcasters. Umber ravagers were sometimes captured by grimlocks and cave-dwelling orcs as hunting monsters. Some would also willingly work under other evil races in any position that didn't put them above ground or risk their lives, such as guards, warriors, or a labor force.[8] Truly horrid umber hulks could even be found under the employ of dragons.[3] They were often captured and used as guard beasts due to their obedience if fed well when young. They would just as easily however, turn on their masters for any reason, or for no reason at all.

Dead umber hulks were harvested by other races such as by kobolds and goblins to make equipment such as shields with their hides and maces with their mandibles, and by spellcasters for their eyes to brew potions.[8] Umber hulks were despised by most underground races not simply for their predatory nature, but because they were indirectly responsible for some of the worst conflicts in the Underdark. Because they constructed so many tunnels, and preferred to do so near ore veins, they linked creatures that would have otherwise been isolated together, inevitably resulting in warfare for the newly exposed materials.[10]

The dwarven expression "chasing an umber hulk" referred to a prospector's strategy of following an umber hulk's trail in hopes of finding uncovered minerals, and meant a dangerous plan that could come with great reward with enough luck.[10]

Umber hulks would feed on purple worms, ankhegs, and similar underground creatures, but greatly enjoyed the taste of humanoids. It was rumored that they digested precious metals for dietary reasons but this was mere speculation. Umber hulk teeth were not used for combat, instead serving solely to chew through kills.[8] Some umber hulk caves hosted a variety of fungi and lichen, although not so that the umber hulks could eat them. Instead, the strange plant matter was eaten by large insects the umber hulks allowed inside their homes in order to feast upon the largest ones.

In both behavior and appearance, umber hulks were virtually indistinguishable to outsiders, male or female.[7] Male umber hulks lived for approximately 50 years and females lived for approximately 75 years.[3] Females were rarer than males and males would defend them, possibly at the cost of their own lives, although males left after mating was completed. Females gave birth to live young, producing 1–3 "hulklings", and created a nursery in a hollowed-out cavern in order to care for them. Hulklings quickly gained their iconic abilities and after two years were capable of joining the mother in order to learn hunting. In a few months, they would be mature adults and lived by themselves from that point on. During their infancy, hulklings' mothers hunted for them, killing as much as possible to feed them, and after they grew up would start a new litter.[7]

A particularly long-lived umber hulk might become a "truly horrid umber hulk", a 16 feet (4.9 meters) monstrosity that weighed 8,000 pounds (3,600 kilograms). These particularly destructive hulks were no less intelligent for their age, and had more experience with reading the intentions of others.[3]

Smaller umber hulks were known as umber ravagers, occupying the upper layers of the earth and were the type more likely to be encountered by those who weren't in the Underdark. They were the most likely umber hulks to be found working in groups, as they were generally weaker both in power and dazing ability.[10]

Umber hulks were once reported to be magically created mutants, whose creators had long since been lost to history.[11]

However, according to early writings, umber hulks were among the oldest creatures in the cosmos, having been around since before the Dawn War. They were believed by sages to have emerged from the raw matter of the universe before the primordials had finished their crafting.[10]

A depiction of an umber hulk delver.

A promotional image of an umber hulk from Icewind Dale (game). 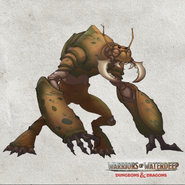 A depiction of an umber hulk from Warriors of Waterdeep. 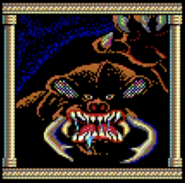 An angry umber hulk as depicted in Secret of the Silver Blades.
Add a photo to this gallery

Retrieved from "https://forgottenrealms.fandom.com/wiki/Umber_hulk?oldid=666090"
Community content is available under CC-BY-SA unless otherwise noted.