Unther was one of the Old Empires in east Faerûn. The Untherans were brought to Toril from Earth by the Imaskar Empire looking for some manpower.[5] After countless petitions, the gods of the Untheric pantheon were able to manifest into Toril by sending physical avatars.[6] With the help of their deities, the former slaves freed themselves and settled the lands that later became Unther. Ironically, their rival in the millennia to come was another human tribe captured by the Imaskari and freed at the same time, which founded the empire of Mulhorand.[7]

After the foundation of the First Untheric Empire, the god-kings of the Untheric pantheon ruled the land without opposition.[8] After Enlil left the Realms in −734 DR,[3] Gilgeam became the immortal ruler of Unther until his death in 1358 DR.[9] In the chaotic period after Gilgeam's death, Mulhorand conquered most of Unther, and a group of spellcasters known as Northern Wizards were able to maintain the north free of the presence of the occupation force.[2]

Then, the Spellplague of 1385 DR ravaged the land and Unther was transported to the world of Abeir,[10] where the people of Unther were enslaved by the Mulhorandi who were also transported to that world, and by the Abeiran genasi. During the final years of the 15th century DR, a second incarnation of Gilgeam appeared to lead them against their masters, before the Second Sundering returned Unther to the world of Toril, where Gilgeam was crowned as the supreme ruler of Unther reborn again.[4]

The populace of Unther before 1358 DR was primarily composed of humans of the Mulan ethnic group, with a few humans of other ethnic groups as a minority. A few demihumans also were also part of the Untheran populace, but only as slaves.[11]

Nobility
Members of Unther's nobility took up positions in the nation's government, often as priests, wizards, or bureaucrats. They were either Gilgeam's priests or his most trusted non-clerics followers. All nobles of Unther were of the Mulan ethnic group and they practiced marriage between members of the same family to maintain the purity of their Mulan bloodlines. Despite Unther's long history, its nobles were rather few in number. During Gilgeam's long rule, families fell from his favor and were sold to slavery, and he elevated a few "pure-blooded Mulans" to replace them.[11]

Middle Class
Mulhorand's middle class was composed of humans, mostly foreigners, who were freeholders, traders or members of the military.[12]

Slaves
Slaves in Unther were either members of those families who fell from Gilgeam's favor, or members of demihuman races. Their lives were worthless in the eyes of those in power, and they were typically bought from other nations, or given slavery as a sentence for crimes, imagined or real.[12]

This situation changed after the death of Gilgeam, in 1358 DR. Mulhorand quickly conquered the land and most slaves became property of the Mulhorandi clergy, gaining the rights of the Mulhorandi slaves.[10] The surviving nobles fled and became fugitives in their own lands.[13]

When the Spellplague transported Unther to the world of Abeir, both the Untherans and the Mulhorandi became slaves of the Shyran genasi. With the return of Gilgeam as the ruler of 15th-century Unther, the laws and culture of Unther became more or less the same as they were before his death.[14]

Unther began as a benevolent nation, but after millennia of governing the land, Gilgeam became corrupted with power and in doing so, he also corrupted the nobility. Consequently, for most of its history, Unther was seen as the most miserable of the tyrannies in Faerûn. While the government espoused the power of law, the ruling class had no regard for human life and less for demihumans. Members of the lower social classes lived not to prosper but only to survive, and many inhabitants opposed Gilgeam's rule.[13]

After the death of Gilgeam, most of Unther territory became part of Mulhorand. In those lands, the culture and society were not different from the Mulhorandi ones. In the north, the few free cities of Unther looked with contempt for their traitorous brethren while trying to maintain alive their old customs.[2]

In the post-Sundering years, the society of Unther was not so different from that of the years before Tiamat killed Gilgeam.[14]

The language of Unther was called Untheric. It belonged to the same language family that originated the Mulhorandi language, but over the course of many centuries, Untheric evolved on its own until few similarities remained between the two languages.[15]

Members of the Untheric military usually became officers. Untheric battle tactics and methods were considered to be old-fashioned by the standards of other faerûnian nations, because the army of Unther was poorly trained and used mostly bronze weapons and armors.[12][10]

Vessels from Unther were named after sea creatures or sea-related myths.[16]

Unther was located in the lowlands around west of the Alamber Sea, down south to the River of Swords and the Azulduth. Originally a larger nation that comprised Chessenta, Chondath, the southern coast of Aglarond, and part of the Shaar,[17] by 1372 DR it comprised mostly by the regions near the Black Ash Plain, the Methwood and the lands near the Smoking Mountains and south of the River Alamber,[18]

All of Unther's territories were changed or destroyed during the Spellplague, and became part of Tymanther.[10] After the Second Sundering, Unther was able to reclaim most of their northern lands, but the nation was unable to retrieve the lands near the Smoking Mountains and south of the River Alamber, which remained part of Tymanther.[19]

Unther's origins were strongly tied to that of Mulhorand. After the Untheric pantheon helped to free the Mulans from their Imaskari masters, those led by Enlil settled in the lands west of the Alamber Sea,[8] in a place of the coast where the god Enlil found pearls, founding the city of Unthalass[23] and the nation of Unther.[8]

The Untherans warred against the Turami natives, driving them to the lands of Mulhorand, and after that, Unther became a highly magical society, prospering under the rule of its god-kings. Unther and Mulhorand clashed occasionally, but eventually realized that warfare was pointless, so all conflicts were carefully controlled by the god-kings while both nations agreed on a common border in the River of Swords. Unther expanded their territories to the north and west, warring with the dwarves of the Great Rift, and gained a reputation for having fierce and ruthless warriors who were hated by those they conquered.[8]

The age known as the "First Untheric Empire" ended when the wizard Thayd instilled a rebellion against the god-kings that eventually led to the Orcgate Wars and the Battle of the Gods that killed most of the Untheric pantheon.[9] Unther lost its southern territories to rebellion and was never able to retrieve them. Soon after its holdings in Chondath collapsed as well.[8] A few decades later Narfell and Raumathar went to war and tried to either conquer or enlist the aid of Unther, but failed at both.[24]

Enlil left Toril in −731 DR, making Gilgeam the supreme god-king of Unther,[23] starting the "Second Empire of Unther" and the Untheric Calendar.[3] Unther, however, had declined greatly and piece by piece its far-flung colonies rebelled. Eventually, Chessenta succeeded in conquering Unther and ruled it as a vassal state for nearly a century. After the dead of the Chessentan hero Tchazzar, Unther was able to free itself and turned its focus inward.[3]

After the Godswar, Gilgeam was slain by Tiamat. Mulhorand seized the opportunity in 1371 DR to launch an invasion, conquering most of the Untheran territories. The Northern Wizards ruled the few free regions in the north, trying to cling to their old customs and lifestyle,[21] but were ultimately defeated and all Untheran territories were conquered by 1379 DR.[25]

In 1385 DR, most of Unther was engulfed by the Spellplague and transported to the world of Abeir.[4] A fragment of the dragonborn nation of Tymanchebar was transplanted from Abeir to the lands formerly occupied by Unther. As of 1479 DR, these dragonborn had formed the realm of Tymanther, named in honor of their native realm and the realm that they believed they had destroyed.[10]

During their time in Abeir, the survivors among the Untherans and the occupying Mulhorandi armies in Unther became slaves of the Shyran genasi.[14] Hearing the pleas of the people of Unther, a second incarnation of Gilgeam arose to defend them near the end of the 15th century DR. In order to win against the Abeirans, Gilgeam struck a pact with the demon lord Graz'zt in exchange for a demon army.[26] On the eve of a great battle against the Shyrans, however, they suddenly returned to Toril as part of the Second Sundering. Gilgeam took advantage of the new situation and quickly led them against the dragonborn of Tymanther, starting the First Tymanther-Unther War.[4][27]

The Untherite army, bolstered by the demons, was able to reclaim most of their old northern territory and even put the dragonborn city of Djerad Kethendi under siege.[28] But when they tried to conquer the territories south of the River Alamber and lay siege to Djerad Thymar, the Tymantherans were able to retaliate thanks to the unlikely arrival of a devil army from Malbolge sent to destroy Gilgeam's demon allies.[29] Without the advantage of numbers and facing the unified force of the dragonborn and devils, and with the threat of the Second Sundering trying to return Tymanther to Abeir (a process that was stopped by Enlil), the Untherite armies were forced to retreat to Unthalass.[19]

Although he was defeated, Gilgeam didn't relent from his plan to retrieve all of the former lands of Unther. As of 1489 DR, Tymanther and Unther were waging a new war, although the Untherite army was unable to defeat the dragon turtle that protected Djerad Kethendi.[4] 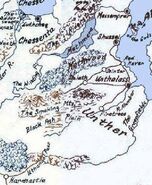 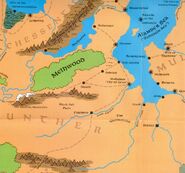 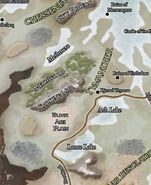 Displaced Unther
Add a photo to this gallery
===References===
Retrieved from "https://forgottenrealms.fandom.com/wiki/Unther?oldid=521701"
Community content is available under CC-BY-SA unless otherwise noted.