Urmlaspyr (pronounced: /ɛrmˈlæspɪər/ erm-LASS-peer[3]) was a city in southern Sembia that was notable mostly for its poor treatment at the hands of the shadovar. The city was supported by Cormyr and a significant amount of trade from that country flowed through its port. Urmlaspyr was blanketed by a layer of dark magical clouds conjured by a Netherese arch mage that was impossible to dispel.[2] It was known for having some of the best glassblowers in Faerun.[4]

Cormyr loaned the city a company of Purple Dragon knights to aid in its defense.[2]

Urmlaspyr was formerly known as the city of temples. When the shadovar outlawed the worship of any deity other than Shar the people of Urmlaspyr resisted and the city was nearly razed and many of the citizens enslaved. The city threw out the shadovar after the Spellplague and was an independent city in 1479 DR.[2] 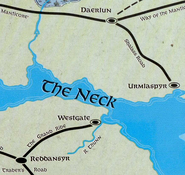 Retrieved from "https://forgottenrealms.fandom.com/wiki/Urmlaspyr?oldid=419924"
Community content is available under CC-BY-SA unless otherwise noted.