Forgotten Realms Wiki
Register
Don't have an account?
Sign In
Advertisement
in: Large creatures, Creatures of neutral alignment, Creatures with a 2 challenge rating (3e),
and 4 more

Urogypus
A uropygus, also known as a giant whip scorpion[2], giant pedipalp[1], monstrous uropygid[1], or occasionally giant vinegaroon[1], was a very rare and dangerous creature, mainly found in the Underdark.

Uroypgi were the largest type of pedipalpi. They had spiny bone-armored pincers and feelers like the smaller types, but also had tails which resembled the stinger of a scorpion. It was sometimes called a giant vinegaroon due to its acidic spray.[2][3][1][4]

Uropygi fought with their two pincers and vicious bite. They could execute a gripping attack, and if the opponent could not escape it, they crushed and held in place for a series of bites.[2][3][1]

As well as using their appendages, these creatures were also able to release poison gas thrice a day. The yellow, sultry and acrid gas would expand around a 20' radius sphere and those within would uncontrollably spasm and tremor.[2] 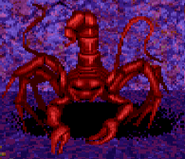 A uropygus from the Menzoberranzan video game.