Start a Wiki
Welcome to the Forgotten Realms Wiki


A guide to the Forgotten Realms that anyone can edit, covering sourcebooks, novels, video games, comics, and more.

This wiki was founded in October 2005 and currently has 31,990 articles.
Spoilers: This wiki does not provide individual spoiler warnings. You should beware the possibility of encountering spoilers while browsing. 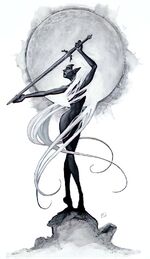 Eilistraee was the chaotic good drow goddess of song, dance, swordwork, hunting, moonlight, goodness, and beauty, within the drow pantheon known as the Dark Seldarine. She was the patroness and protectress of the few dark elves who longed to return to the surface and live there, at peace with other races, and to abandon the endless conflicts and intrigues that dominated the lives of most drow.

She was often referred to as the Dark Maiden, the Lady of the Dance, or Lady Silverhair, and sometimes The Dark Dancer, among other titles. After 1375 DR, for a brief time and while her faith subsumed that of her brother, the Masked Lord Vhaeraun, she became known as The Masked Lady.

Eilistraee was the daughter of Araushnee and Corellon Larethian, a free-spirited and kind-hearted goddess, with a fiery streak in her personality. After Araushnee's treachery almost made her slay her own father when a host of evil deities assaulted Arvandor, even as she was cleared from any guilt, Eilistraee chose to share her mother's exile. She made that choice because she knew that the drow would need her light in the times to come. After the descent of the drow, Eilistraee tried her best to be a mother goddess to her people and bring them the hope of a new life: she fought to lead them back to the lands of light, helping them to flourish and prosper in harmony with all other races, free from Lolth's tyranny. Hers was an uphill battle, however, as her power was little and she was opposed by all the gods of the Dark Seldarine. But, despite having to overcome many hardships and setbacks, Eilistraee never gave up fighting for her people.

In the 1370s DR, her conflict with her mother over the souls of the drow race ultimately led to Eilistraee's defeat and temporary disappearance. It lasted for about a century, until the Second Sundering, when Eilistraee returned to life and to her followers.

The AD&D Trading Cards are a range of trading cards published by TSR, Inc. between 1991 and 1993. They were first introduced by James Ward in Dragon #160, with an insert of 17 cards, mostly based on popular characters from various AD&D novels and video games, and were intended to test the waters for a potential trading card product line. These proved popular, and more cards were produced. They were released in three separate yearly sets, and each set consisted of two different series. The 1992 and 1993 sets include additional promotional and rare cards.

The cards adhere to 2nd-edition Advanced Dungeons & Dragons rules, and present popular characters, creatures, and items from many of TSR's game worlds, including the Forgotten Realms, Dark Sun, and Greyhawk settings, as well as new creations found nowhere else. The front of each card features artwork either re-used from other TSR products or original to the Trading Cards range. These images were outlined by a solid color that indicated series and rarity. The backs presented short blurbs and rules information.

Hear ye, hear ye! Quiet in back! The Heralds of Faerûn hereby announce that, to celebrate the upcoming release of the Middle-earth: Shadow of Mordor video game, the Shadow of Mordor Wikia has issued formal challenges to the wikis of the cosmos, pitting their champions in head-to-head contests of popularity and strength of arms. The Forgotten Realms Wiki has accepted this challenge as a test of honor.

Drizzt Do'Urden, much-loved renegade drow ranger and master of dual scimitars, of some 26 years' fame, is now facing Talion, the risen Ranger of Gondor and skilled swordsman, at yet untested.

Let it also be known that our sister wiki, the Baldur's Gate Wiki has also accepted a challenge, and that Viconia DeVir, drow priestess of Shar, is facing Galadriel, the elven Lady of Lórien.

Show your support and click your acclaim for your favorite heroes. We're sure ye'll choose wisely.

We're pleased to announce that the ranger of Icewind Dale has a clear lead over the Ranger of Gondor. 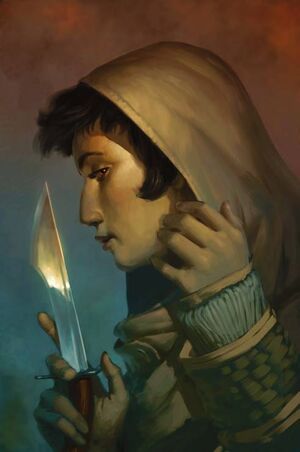 Well met, traveler! The Forgotten Realms is the most detailed and popular Dungeons & Dragons campaign setting from TSR, Inc. and Wizards of the Coast, and includes parts of Oriental Adventures, Al-Qadim, Maztica, The Horde, Planescape, and Spelljammmer. This wiki covers Realmslore in these settings across all media and editions. See the aims of this wiki here.

Do you have a request or need help? Then give us a note here.

This page is for raw interwiki transclusions.

If you are seeing this message outside Community Central, please edit the page to ensure it is using the "raw:" prefix as shown below.

To use this page on another Wikia page, insert the following into that page, at the place you wish the content to appear, usually the bottom:

The border color can be specified by passing an unnamed parameter, for example:

The template outputs a block-level element with the id "dndfooter". Additional styling can be done in your site and user CSS files using this id, for example:

Retrieved from "https://forgottenrealms.fandom.com/wiki/User:BadCatMan/Main_Page?oldid=251051"
Community content is available under CC-BY-SA unless otherwise noted.