Start a Wiki
Welcome to the Forgotten Realms Wiki


A guide to the Forgotten Realms that anyone can edit, covering sourcebooks, novels, video games, comics, and more.

This wiki was founded in October 2005 and currently has 30,541 articles.
Spoilers: This wiki does not provide individual spoiler warnings. You should beware the possibility of encountering spoilers while browsing. 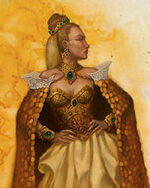 Waukeen was the goddess of commerce for much of the continent of Faerûn. She was known as the Merchant's Friend for her guiding hand in all forms of commerce (legal and otherwise); as Liberty's Maiden for her support of free and fair trade through honest bargaining based on supply and demand; and as the Golden Lady for her unabashed belief in the accumulation of wealth and, most importantly, the use of those riches to improve civilization for everyone. She was a relatively young deity, driven to accomplish her goals quickly and completely so she could move on to the next one. This impatient streak often led her to try alternate methods when "business as usual" resulted in an impasse, and manifested itself in her church which sometimes let the ends justify the means.

Her stubbornness likely led to her downfall during the Time of Troubles when she, like almost every other deity in the Faerûnian pantheon, was cast down to Toril and forced to inhabit the Prime Material Plane in avatar form. She joined up with Lliira and hatched a plan to get back to her realm in the Outlands, first by attempting to bribe Helm, who was guarding the Celestial Staircase, and then by striking a bargain with an archfiend of the Abyss, Lord Graz'zt. Unable to leave Toril in divine form, she temporarily bequeathed her divinity and portfolio to Lliira, only to be betrayed by Graz'zt and held prisoner for twelve years. During her long absence, not even Lliira knew her whereabouts and the church of Waukeen began to decline rapidly. 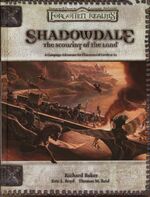 Shadowdale: The Scouring of the Land, designed by Richard Baker, Eric L. Boyd and Thomas M. Reid, is an adventure module set in the Forgotten Realms using the Dungeons & Dragons 3.5 edition ruleset. It takes PCs through an invasion of Shadowdale in 1375 DR by forces of Zhentil Keep, the church of Shar, and the drow of Maerimydra, as part of an assault upon the goddess Mystra and her Weave of magic. It is the second of a three-part super-adventure detailing the end of the 3.5 edition setting, but it can be played independently.
(Archive | Read more...) 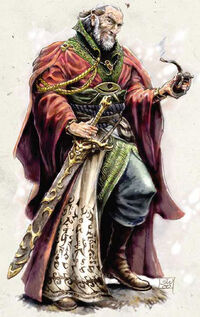 Elminster Aumar, the Sage of Shadowdale.

Well met, traveler! The Forgotten Realms is the most detailed and popular Dungeons & Dragons campaign setting from TSR, Inc. and Wizards of the Coast, and includes parts of Oriental Adventures, Al-Qadim, Maztica, The Horde, Planescape, and Spelljammmer. This wiki covers Realmslore in these settings across all media and editions. See the aims of this wiki here.

Other Dungeons and Dragons gaming wikis from Fandom

Retrieved from "https://forgottenrealms.fandom.com/wiki/User:Moviesign/Main_Page?oldid=199693"
Community content is available under CC-BY-SA unless otherwise noted.