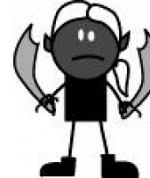 You have new messages.

To reference back to any earlier conversation or to provide evidence of misplaced judgement here are the ARCHIVES for your enjoyment.

editing saw that you still have my back with it and yes I'm a sh***er not even doing what I said I would. Lots of recent happening bro, deaths, work, more deaths, some games, and did i mentioned deaths in the family i mean yeah busy year. but i promise(eventually) to get to the years. I think i have the materials lying around so ill find them and then get some time to do a little editing. Pharuan Undearth (talk) 02:34, January 10, 2014 (UTC)

Dude take a look at greenmeadows talk page I have to point it out in case you didn't see it. About a name page/redirect. Pharuan Undearth (talk) 00:21, January 14, 2014 (UTC)

I'll check that out and I know about the policy I've been here longer lol. I do cite my sources some have books like moon horse I have the book it said it was in I couldn't find it no actual page though, but I will edit it. Pharuan Undearth (talk) 17:52, January 14, 2014 (UTC)

well like I said there isn't a single map that had Greenmeadows on it. Also, why I originally brought up the redirect name post. Pharuan Undearth (talk) 01:37, January 18, 2014 (UTC)

eh its alright but considering there are over 30+ numbers on there making of list of them is going to be a boring task. Maybe later. Pharuan Undearth (talk) 18:08, January 18, 2014 (UTC)

well like I said there isn't a single map that had Greenmeadows on it. Also, why I originally brought up the redirect name post. Pharuan Undearth (talk) 01:37, January 18, 2014 (UTC)

Hi I see u like forgotten realms, I was just reading book 4 extinction an i was wondering what a Uridezu demon looked like an i saw ur web name as pharuan :) i'm guessing it is the same as the dark elf wizard. I just got into Reading these books a year ago an so far I have read I would say almost 50 of them, I started with Homeland The Legend of Drizzt an I was Hooked I carried on an read all thirteen in that series an then i read the Hunters Blade trilogy an then the 3 transitions. Then I read the sellsword trilogy with artemis an Jarlaxle I think if u read the drizzt series you need 2 read Book 1 in that series it helps explain what happens with the crystal Shard. I then picked up The stone of tymora Trilogy in Hardcover an I got half way through it an it got stolen :( It was REALLY GOOD! If you haven't read it you should! I then purchased the cleric quintet more amazing history of faerun, I also picked up the neverwinter series with drizzt ive only read up to book 4 i still need to read the last threshhold. I'm currently reading war of the spider queen I'm on book 4 I'm really enjoying it. After that I will read the last threshhold an I got book 1 of the next series The sundering book 1 The companions. I have always heard an read little bits of this wizard el-minster so i picked up the first book the making of a mage el-minster i think i will drop into that series after. Its hard to find alot of ppl into this reading an if you ever want to chat or talk Forgotten Realms my e-mail is adamtobin.cdn@gmail.com I look forward 2 maybe chatting Adam Tobin||||

Yeah I've read the war of the spider queen books but I made up my name after the continent of Faerûn plus my Pharuan is said like Fair-run almost the same. This was years ago when wow first came out, then I saw that name in the R.A. book and my jaw dropped showed my friend and he laughed at me. That's a lot of books you've read. I don't really send e-mails except to family members. If you want I would not mind talking on here at all. Pharuan Undearth (talk) 02:27, January 21, 2014 (UTC)

Retrieved from "https://forgottenrealms.fandom.com/wiki/User_talk:Pharuan_Undearth?oldid=175400"
Community content is available under CC-BY-SA unless otherwise noted.