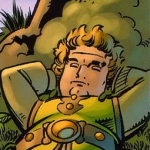 You know, without your further readings edit I never would have discovered that perilous gateways page. Thankyou, it actually has tons of info that isn't anywhere else, including that Baphomet of all creatures has a following in the city. Gem Hound (talk)

Hello Regis87! After all the great work you've done on Kara-Turan monsters, maybe you would like to improve the article section on the spirits of Kara-Tur? Just a thought... Daranios (talk) 15:45, March 16, 2020 (UTC)

Nah, I put in all I found within reasonable time back then. I would appreciate if you'd add any additional stuff you have come across during your Year of Monsters spree. Daranios (talk) 20:26, March 16, 2020 (UTC)

Hi. I see that my edit was reverted. I am sorry, I hope I did not upset you. I would like to discuss with you some of my opinions about games classification (I highlight that to assure you I want to be reasonable).

Thanks for the suggestions! This week-end, I am going to re-organize the list into a table similar to List of comic books. I can add a column or color to indicate a Gold Box game with a note about them outside the table. --Regis87 (talk) 21:24, April 24, 2020 (UTC)

Hi. I feel a need to chime in with a few points:
Thanks for your contributions. If you are more interested in categorizing games by engines and type, you might consider taking your skills to http://goldbox.fandom.com. If you are into lore, there are lots of video game pages that need their items, creatures, locations etc, filling out.
Thanks again, and happy gaming! ~ Possessed Priest (talk) 20:26, April 25, 2020 (UTC)

Thank you, Possessed Priest. I see now the scope of this wiki, and I agree with everything you said.
Just one thing: if a character is exported from Hillsfar (game) to Curse of the Azure Bonds (game), some extra content is unlocked, linking the plot of the two. I think this would be a reason enough to add the former in the Pool of Radiance series. What do you think?
Maybe sometimes I am lost in translation. Anyway, if the English language allows the "series" word to refer to two items only, so be it. In my homelanguage it would be wrong to say, e.g.: "I ate a series of biscuits" if I only ate two.
I added Iron & Blood: Warriors of Ravenloft just because it is the third and last Ravenloft game, although a forgettable one. I was wondering why the first two were included here in the first place, but you answered that already. Cool!
Actually, I am an administrator on StrategyWiki. The Forgotten Realms video games include more than 50% of all D&D games ever released. I found this wiki looking for more information about the video games. ---Abacos (talk) 21:26, April 25, 2020 (UTC)

"Anyway, if the English language allows the "series" word to refer to two items only, so be it."

I think it could go either way, though it probably should be on the list. The manual states that the party ventures to Phlan (Pool of Radiance), then Hillsfar (Hillsfar), and then to Tilverton (Curse of the Azure Bonds): "Like most heroes, however, the adventurers who freed Phlan did not stay around. It is known that they took a boat from Phlan to the City of Hillsfar across the Moonsea. From there it is rumored that they traveled south and west in search of further adventure." For me, this is enough to add it to the series page (though with a note of explanation, as Hillsfar is completely different to the rest of the series in terms of style, and is often skipped). Hopefully this wiki satisfied your need for some Forgotten Realms video game lore (but there is still a lot to do)! ~ Possessed Priest (talk) 23:30, April 25, 2020 (UTC)

Hiya. i added all the index that was missing (might need to organize the items, there are a lot). The next step could be tying it to the cannon, i have the approximate realm year and there are events worth mentioning. Not sure where to stick the summary of the story events though. cheers. Artyom.pavlov (talk) 21:22, May 17, 2020 (UTC)

Awesome, thank you! I can organize the index if needed. For the story, you can create a section called Plot after the Gameplay section and write it there. As for the DR date, it might need a note detailing why its approximate. Cheers! --Regis87 (talk) 21:44, May 17, 2020 (UTC)

Retrieved from "https://forgottenrealms.fandom.com/wiki/User_talk:Regis87?oldid=554898"
Community content is available under CC-BY-SA unless otherwise noted.