The languages it knew in life[1]

Any[3]
Vampire spawn were undead created by vampires.[3]

Vampire spawn appeared as they did in life, though their features were hardened and appeared predatory.[3]

A vampire spawn was innately subservient to the vampire that created it. They could only achieve free-will if their creator died[5] or if their creator voluntarily granted them freedom, but once free of their bondage a spawn could not be enslaved again.[6]

Spawn typically believed they were superior to other living or undead creatures, regardless of how powerful a creature actually was.[7]

When it came to a life of adventuring, vampire spawn would seek vengeance on their creators, or penance for their new damnation. If these monsters could overcome their ravenous emotions, they might seek out knowledge, glory, or power. Pride was the true driver of the vampire spawn, since they believed themselves better than others.[7]

Vampire spawn did not possess all of the standard abilities of a true vampire, though they still suffered from the affections of all their traditional weaknesses and vulnerabilities.[7]

Vampire spawn were the masters of stealth and charismatic cunning, easily standing their ground against any foe in combat. For them, battle was simple, because if they couldn't win through sheer force, they could vanish using abilities like gaseous form or spider climbing. Like most undead, their bite and touch caused blood drain and domination, making them terrible opponents of living beings.[7]

Much like other intelligent undead, vampire spawn were rarely known to associate themselves with any religion.[7]

Vampire spawn were often found in the Rauvin Vale and Sundabar Vale in the Silver Marches.[8]

In the Demiplane of Dread, the vampire Strahd von Zarovich had numerous vampire spawn servants that either served at his castle or were hidden in settlements across Barovia. Many of these spawns were formerly consorts of his.[9]

Besides true vampires, vampire spawn were often known to serve a variety of powerful undead, such as atropals and skull lords.[10]

When acting of their own free will a vampire spawn were often known to garner other undead as soldiers, such as ghouls and wights, or bodyguards, such as mummies or mohrgs.[7] 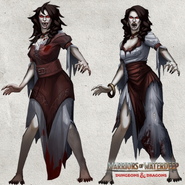 A depiction of vampire spawns as appeared in Warriors of Waterdeep.

Adventures
Keep on the Shadowfell • Curse of Strahd
Video Games
Heroes of Neverwinter • Idle Champions of the Forgotten Realms • Baldur's Gate III
Novels
Master of Chains
Board Games
Tyrants of the Underdark: Aberrations and Undead
Organized Play & Licensed Adventures
Black Heart • The Vampire of Skullport • The Vast Emptiness of Grace • The Fallen Star