Monster Manual II 1st edition
Vargouilles (pronounced: /vɑːrˈgwilz/ var-GWEELZ[7][8]) were swarming denizens of the lower planes, flying heads that took to unlit skies searching for living victims to consume or infect.[1]
“
Until ye've seen a king's head tear off his shoulders and flap aloft amid fountaining blood, only to turn and lap up his own dying gore as his body totters and falls, ye haven't yet lived. And if ye want to go on living, ye might want to stop watching in favor of fleeing.
”
—  Elminster[1]

Vargouilles resembled grotesquely deformed human-like heads about 18 inches (46 centimeters) high and 10 pounds (4.5 kilograms) in weight.[2] They had a wingspan of 3​ to ​4 feet (91​ to ​120 centimeters), with leathery, bat-like wings taking the place of ears.[1][2] Flailing tendrils crowned and fringed their heads in place of hair, and an unnerving green glow could be seen in their eyes. They often wore a wicked sneer, with jagged teeth laid inside their distended, shrieking maws.[2][4]

Vargouilles loathed entering lit areas; they would extinguish handheld light sources like torches and lanterns and avoided anything brighter.[4] They typically remained in dark, isolated areas waiting for prey to come to them but were occasionally driven by their instinctual craving for live prey to risk exposure and fly into the night.[1][4] They had no sense of value, only keeping the treasures of former victims in their lairs out of indifference, along with their corpses.[4]

A vargouille's terrible shriek, combined with its horrifying appearance, could paralyze any non-vargouilles nearby.[4] Thankfully, being attacked by the monsters, an inability to see them, a few seconds to recover, or simply the physical and mental fortitude to withstand their presence was enough to overcome their screams.[2] More dangerous were their fangs, which contained a powerful venom that prevented magical healing. The physical damage from their bites was largely permanent, with the exception of certain powerful forms of magic. Neutralize poison and heal would lift the condition, and delay poison temporarily allowed for normal magical restoration, but only magic as powerful as regenerate or well-worded wish spells could ignore the poison while still healing the recipient.[2][4]

Vargouilles shrieked before attacking, sinking their teeth into their prey and occasionally kissing them to infect them with their disease.[2][4]

Lacking in any form of sophistication or organization, vargouilles gathered in packs, clusters that could be as small as pairs or mobs that could contain up to eleven members. The weak and wounded were devoured by the strong, and only the most powerful vargouille was in charge.[2][4]

Vargouilles were incapable of speech but understood the lower planar languages of Infernal and Abyssal, as well as the languages of their former selves.[1]

The eyes of these creatures were capable of seeing in total darkess,[1][2], as well as the infrared and ultraviolet spectrums.[5]

Vargouilles largely lacked natural predators outside of the good creatures and friends of victims attempting to drive them to extinction.[4] Their want for live prey often went unfulfilled within the Abyss, where most creatures regarded them as verminous nuisances, forcing them to subsist on other pests, carrion, and the ichor of dead fiends.[1][4] Only when flocking together in great swarms could they give other fiends any pause, and even then only a fearless mane or lone dretch would be in serious danger.[1]

By infecting other beings, particularly humanoids, with their unique disease, vargouilles spread like a virulent plague.[1] Using adventurers and travelers as vectors, vargouilles shared their disease through a kiss, normally paralyzing a victim with their shrieking before delivering it.[4] The transformation was as bizarre as it was horrid, said to be the result of a curse allowing a fiendish spirit to invade and mutate the victim.[1] The process could take as little as a few hours or as long as a day to complete and began somewhat innocuously as the victim lost all hair. Afterwards, the victim's head began to resemble a vargouille more with each passing hour, teeth sharpening into fangs, tentacles sprouting from the scalp and chin, horns appearing on the top of the head, and ears becoming pointed and slowly developing into large wings. From then on, possibly before, the victim's intellect and personality would degrade, until finally the bestial mind of the former individual ripped itself away from its body and began to drink from the resulting carnage.[1][2][4]

Vargouilles always sought to spread their sickness, as—outside of their hunger for living flesh—the urge to breed was their only—and at many times a stronger—motivation. Unless faced with serious opposition, their need for procreation and terrifying nature would allow them to quickly overrun the surrounding area.[4] Luckily, the vargouille curse was not irreversible, and there were many ways to cure it if the individual in question lacked the vitality or will to resist it alone. Spells that removed diseases or curses could dispel the condition, as could powerful magic like greater restoration. The presence of powerful illumination spells such as continual light or daylight or of actual daylight only temporarily halted the vargouille curse.[1][2][4][5]

Vargouilles infested all the lower planes, particularly the deepest of the Tarterian Depths, where they were rumored to have spawned, but in truth they were natives of the many caves and skies of the Abyss.[1][2][4][5]

Rarely, if not intentionally released to cause chaos, they were known to parasitically latch onto demons when they were being conjured in order to feast on the less dangerous prey of other worlds, bypassing the summoner's precautions and escaping into the world.[1][5]

Once loosed upon a plane, such as the Outlands or Material Plane, they made homes in cemeteries, caverns, subterranean pits, ruins, and other dark, decaying places, although they occasionally managed to lair in the catacombs and sewer systems of larger cities.[2][4][5]

Exactly where the vargouillles arose from was unknown, although some theorized that a shator demodand had made them to plague his foes on other planes only for them to devour him.[9]

The wizard known as Rozvankee the Strategist, a specialist in terror weapons, was said have been the creator of the vargouilles, having made them to end a continuous siege on a neighboring duchy. After unleashing the first nine of the vargouilles, which quickly ruined enemy morale, she ended the siege, but she eventually outgrew her mortality and became a lich. The "Blood Queen" then traveled to the seas of the Gaping Maw, acting as a pirate on a three-masted ship constructed from her enemies' skin and bones. She traded small vargouille mobs as well as other creations with the tanar'ri in exchange for favors and insurance against attacks.[4][10]

Legends said that a sorcerer having nowhere near the skill level of Rozvankee somehow once commanded a vargouille swarm by holding up shields and banners bearing Rovankee's family's symbol. Her upstart empire was only ended after direct dissuasion from Rozvankee herself. Regardless of the story's truth, many conmen were known to sell shields and banners claiming they protected from the vargouilles.[4]

Summoned to Zakhara during ages past for an unknown purpose, vargouilles were believed to be remnants of the Ruined Kingdoms. They had spread from their typical desolated ruins in the Cites of Ancients and Haunted Lands to the crypts of new settlements.[6]

An illusory vargouille as depicted in the Advanced Dungeons & Dragons comics. 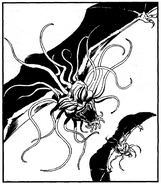 Vargouilles as depicted in the City of Delights.

Adventures
Swords of the Iron Legion • The Twilight Tomb