Hand with eye in the palm

As a deity, Vecna did not claim a domain, but instead wandered the entire multiverse.[15] He maintained the Citadel of Cavitius, originally on the Quasi-Elemental Plane of Ash near the border to the Negative Energy plane, which he had wrested away from the Doomguard long before.[16] The Citadel was used by Vecna as his fortress, which he visited regularly, to gloat on the despair of his defeated enemies.[12] Later, it became his prison as it was drawn into the Domains of Dread by the Dark Powers.[4]

Vecna was the original author of the Book of Vile Darkness, which later received additions from other evil scholars.[17]

In addition to his prerogatives as a deity, Vecna also sponsored pacts with warlocks as an undying patron, owing to his perspective as a once mortal being who had become knowledgeable of the secrets of life and death over many lifetimes.[18]

Some sages also claimed that Vecna had laid out traps for wizards seeking forbidden secrets in their quest for power. Those wizards that stumbled upon those traps were transformed into nothics.[19] It was common to find nothics in cults to Vecna serving as guardians or jesters, as well as spies to Vecna himself, who could always see through their single eyes.[20]

Vecna was a sworn enemy of the Raven Queen, whom he envied for her unique abilities to tap into the flow of souls and to harvest knowledge. One of his goals was to overthrow the Queen and rule the entire Shadowfell from her Fortress of Memories. His servants constantly battled with the Raven Queen's shadar-kai followers.[21]

Vecna also obsessed about taking revenge over the vampire Kas for his betrayal.[21]

Vecna's early life was clouded in legend and contradiction. Most accounts stated that he was originally a human wizard from Oerth, although some reports claimed that he was a half-elf.[2] After having become an extremely powerful wizard and starting to fear for his own mortality, Vecna was taught by Orcus how to achieve undeath, later becoming one of the most powerful liches ever in existence.[3]

During his reign, Vecna trusted his lieutenant Kas with most administrative tasks. He forged the powerful Sword of Kas as an instrument of his lieutenant's authority. However, Vecna's evil, manifested in the sword, seduced Kas into usurping and killing his master. Kas then battled Vecna, who banished him to his realm of Cavitius, but not in time to avoid his own destruction. The only traces left of Vecna's physical body were his left hand and eye, which still carried a fragment of the lich's will. Their latent power turned them into the artifacts known as the Hand of Vecna and the Eye of Vecna.[2][3][4][10][22]

Vecna's spirit, however, endured. After several centuries, he amassed sufficient followers and worshipers among ambitious wizards to reach the status of demigod.[2] At this point, the threat of Vecna's ascension was known to many, including Elminster.[23]

After a failed attempt to ascend to full deity status, Vecna himself was banished to Cavitius, which was drawn into the Domains of Dread by the Dark Powers. Vecna's failure freed Kas, who had been turned into a vampire after a long period of exposure to the negative energy prevalent in Cavitius. Kas became the lord of Tovag, a realm originally from Oerth that was drawn into the Domains of Dread bordering Cavitius. The two realms formed the Domain of Dread known as the Burning Peaks.[4][10][24]

Some time later, Vecna once again attempted to ascend to the status of greater deity by organizing a centuries-long plot that culminated with absorbing the essence of the demigod Iuz. His plans also involved an invasion of Sigil, from where Vecna then aimed at controlling the entire multiverse.[11] Having his plans once again thwarted by adventurers, Vecna was expelled from Sigil with the help of the Lady of Pain and had his essence separated from Iuz, but the power he acquired through the process still allowed him to retain lesser deity power.[1][25]

Vecna's invasion of Sigil caused a great disturbance in the multiverse. Following his defeat, the Lady of Pain strengthened Sigil's defenses and reorganized the planar structure in order to repair the damage caused and to prevent such an event from ever happening again.[25] 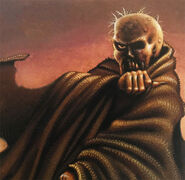 Vecna the Arch Lich from Spellfire: Master the Magic.

Promotional wallpaper of Vecna.
Add a photo to this gallery

The Oerthly pantheon
Powers of Oerth who have influenced the Forgotten Realms
Celestian • Vecna
Retrieved from "https://forgottenrealms.fandom.com/wiki/Vecna?oldid=654909"
Community content is available under CC-BY-SA unless otherwise noted.