Green, black[3]
Vegepygmies, also known as moldies, mold folk, or mold men,[3] were fungus creatures that lived in dark forests or underground, hunting for sustenance and spreading the spores from which they reproduced. They were spawned from dead humanoids or giants or beasts that were killed by a type of mold commonly known as russet mold.[1]

Vegepygmies stood between 2​ to ​4.5 feet (0.61​ to ​1.4 meters) tall with muscular frames covered in plant matter skin. Their coloration depended on their environment, ranging from brown and green skin in wooded areas, gray and black skin underground, or sometimes a moldy blue and white. Their eyes were normally white, lidless, and did not appear to have pupils, and naturally grew a dull brown topknot. They had heavy wrinkles and lacked noses. Lengthy lines of tendrils, similar to hair cover the creatures, ending in a topknot at their head and flowing regardless of the presence of wind. Their hands end in thorn-like claws.[2]

Vegepygmies' claws could be used as natural weaponry. They showed great resistance to electrocution, as currents ran through them and dissipated into the earth, and their physiology granted them resilience in the face of piercing attacks. Coupled with their physical resistances, vegepygmies naturally regenerated most damage, recovering even from a life-threatening injury. However, this regeneration could be canceled by extreme heat, cold, or rotting. Their skin easily blended into terrain surrounded by plant life, and their eyes could see easily in darkness. Due to their primitive, plant-like brains, they showed some resistance to enchantment.[1][2]

As vegepygmies aged, spore clusters collected on their bodies, and their skin grew tougher and harder to damage. They could disperse clouds of spores that acted as russet mold spores, infecting non-plants who breathed them in, and possibly killing them, causing them to give rise to more vegepygmies.[1]

Thornies were stronger and tougher, if less intelligent than vegepygmies. They were quadrupeds that acted as animals for the vegepygmies. Their bodies were covered in sharp barbs, which injured creatures that tried to grab hold of them.[1]

Vegepygmy hunters employed primitive clubs and spears, with any other technology being acquired from other races, or copied directly. The extent of their tactical ability lay in ambushes and maneuvering enemies towards thornies.[2]

Vegepygmies were organized into simple tribal units, led by their elders, whom outsiders referred to as "chiefs". They were highly tribal and territorial and were generally of low intellect. Mold-folk culture centered around the harvesting of food and the spread of the tribe, even at the cost of their individual lives. Veneration was offered to those who propagated the race, whilst those who refused to grow the tribe were treated as pariahs.[2]

Culture also varied based on location. Forest vegepygmies were more aggressive and predominately hunters, while underground vegepygmies were vegetarians, preferring to scavenge, and more likely to ally with other plant-based races. Due to a reliance on different resources, vegepygmies of different tribes were less likely to fight.[2]

Vegepygmy had generally positive relations with other fungal or plant creatures possessing an instinctive feeling of kinship with them. Myconids viewed them as rustic and less enlightened kin and would ally with them, if warily. Vegepygmies would employ shriekers and violet fungi[1] in their lairs as living alarms and security, with only native mold men knowing how to avoid them. Vegepygmy had tense relations with other races, many of which viewed them as monsters. They were known to establish neutral zones in order to engage in mutual unimpeded worship.[2]

Vegepygmies were likely once capable of a spoken language, as some with ancestral memories were capable of speech, and metals bearing carved inscriptions were found within their treasure pits. Lacking this, the vegepygmy language consisted of hissing, grunting, chest thumps, gestures, and rhythmic taps.[2]

Vegepygmies held strong reverence for ancient relics and sacred objects. Many were of unknown composition and origin, and a few of which were powerful weapons.[2] They would also worship constructs such as golems as lesser deities, giving them offerings.[5] Other tribes might engage in the ritual sacrifice of sapient beings. Ritual dances were also done, with some even killing themselves by accident in reckless performances.[6]

Some vegepygmies were born with supernatural abilities based on their ancestral memories. These vegepygmies became witch doctors capable of druidic and shamanistic magic, such as the ability to empower plant monsters and to rapidly grow nearby plants for offensive purposes. They also could inherit cultural knowledge and the ability to vocally communicate.[2]

Vegepygmies were omnivorous, capable of eating meat and blood regardless of its state of decay. They would grow moss and fungi to subsist on, and in particularly hard times, they could absorb nutrients from the soil itself and from almost all organic matter, including as bone. Despite the ability to vocalize through hissing, they lacked the ability to properly speak, although a highly rare few were born with the ancestral ability to do so.[1][2]

“
Five brave heroes went forth to examine the disturbance that had spawned so many fell beasts. Only Eswen returned, and she nearly insane. Accompanying her was a short creature most strange, made of plant and too primitive to speak. It watched over her, but on the day Eswen finally passed, it departed into the Dim Forest. It was never seen again.
”
— Records of Geoff[2]

Vegepygmies did not have sexes or reproductive organs. Typical vegepygmy reproduction involved the infection of other creatures. Whether via russet mold or a Chief, vegepygmy spores were toxic and could be used to infect animal life via inhalation. Once killed, the corpse would become a new vegepygmy according to its size, with beast corpses resulting in thornies. The process was painful and slowly weakened a victim until death. This wasn't required however, as the death of a sufficiently old vegepygmy would create two smaller individuals. Memories from an ancestral line could be passed down through generations, with even ancient memories resurfacing in new vegepygmy.[2]

Russet mold itself was created when vegepygmy spores gathered into patches on nearby terrain.[2]

The origin of vegepygmies was ultimately unknown. It was speculated that vegepygmies originated outside of Toril, and were brought there by a falling star infested with russet mold. Other reports noted their presence in a mountain dungeon containing a strange metal substance.[1]

Numerous vegepygmy tribes were known to dwell in the Chultan wilderness in the late 1480s DR.[7] 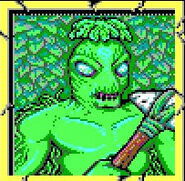 A vegepygmy in service of Moander.