Vermulean was a druid who lived in the woods, outside a village in Icewind Dale, which was raided by the drow.[1]

The druid had a grey-white beard, a mustache, thick eyebrows and a bald head. He wore gold-colored glasses and a long brown robe.[1]

He was a humble old man skilled in the study of gemstones, and believed it to be a relaxing purduit. He talked in a typical way of a sage, often trivializing complex matters. He did not like the presence of dark elves near his cottage, and forced them to leave him alone.[1]

Vermulean had a vast collection of books, spell scrolls, and notes, as well as bottles of unknown substances. He also had some alchemy equipment scattered around his home, and most of items were covered in cobwebs. He was knowledgeable about the ways of the drow and Menzoberranzan.[1]

In the mid–14th century DR, a group of adventurers sought to enter the Underdark to rescue their folk and the town council from the drow who raided their village. Vermulean heard their quest, and was sympathetic. He offered to enchant gemstones to grant them infravision, free of charge. These enchanted gemstones could protect the owners from radiation that emanated from underground, and allowed them to see in the Underdark. He told them about the nature of the dark elves, but advised them to seek out Drizzt Do'Urden, who the druid had never met. He explained that Drizzt was the foremost expert on Menzoberranzan above ground.[1]

Once the companions finally reached Menzoberranzan, they sought to again make contact with the wise old man once more. Upon using the magics of Ssar Tarell, a visual portal was opened up where Vermulean identified the gems he originally gave them. It turned out that one of these was the Gem of Lolth sought by the houses of Menzoberranzan, as part of the Helm of Spiders.[1] 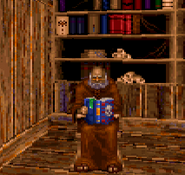 Vermulean as he appeared in his home.
Add a photo to this gallery

Retrieved from "https://forgottenrealms.fandom.com/wiki/Vermulean?oldid=519612"
Community content is available under CC-BY-SA unless otherwise noted.