Forest
Vine blights were a type of blight, a group of evil plant creatures with both movement and some intelligence.[1]

Alone among the blights, vine blights could speak, and their connection to the spirit of the Gulthias tree that spawned them meant that they spoke in a broken version of the spirit's voice. They were known to taunt victims and bargain with more powerful foes.[1]

Vine blights were slow to move, but as long as they remained motionless they were indistinguishable from a mere tangle of vines. They could not nor see, though they had blindsight. Vine blights also possessed the ability to call vines and roots to burst out of the ground for 15 ft (4.6 m) around them, entangling enemies in the area and hampering their movement.[1]

Vine blights lived in forests under the influence of the Gulthias tree that spawned them.[1] 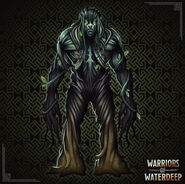 A depiction of a vine blight from Warriors of Waterdeep.