Volkumburgh was a tiny village nestled in the foothills of the Thunder Peaks, south of Thunder Gap.[2]

Many of the major paths and trails in the Thunder Peaks lead to this village,[6] including a winding trail branching south off the East Way[7] that was 100 miles (160,000 meters) long. 50 miles (80,000 meters) to the north-northwest of this village was an abandoned temple, known as the Temple of the Dragon Oracle.[8] Northeast of the village was a set of ruins known as the High Pasture.[9]

Volkumburgh was a herding village, their primary trade good being sheep and the wool they grew.[5]

Founded in 999 DR,[8] the village was originally a noble's villa, but strangely, the location of the village only appeared on maps of Cormyr dated from before 1160 DR.[2]

In the mid-12th century DR,[note 1] King Proster Obarskyr ordered Volkumburgh's College of Shaping Magics to construct a new breed of stone golems, designed to help expedite his building projects.[10] In later centuries, this information could only be found in a single obscure government document in Suzail.[2]

Later that same year Volkumburgh Vale was sacked by that same golem, leading to the destruction of both the magic colleges within it.[10] Before his own villa was destroyed, Lord Volkumburgh hid his treasure[11] in a secret cavern underneath it.[12] A narrow passageway connected the treasure's concealed cavern to a trapdoor beneath the village's fountain.[13] Lord Volkumburgh's treasure was known to the inhabitants of his village, though its location was not. Over time it would come to be known as "Volki's treasure."[1]

Lord Volkumburgh's manor would be rebuilt as the Crimson Wyrm,[1] while the rest of its remains were used to construct the small village.[14] Later, some man would approach the lord and task him with hiding one of the golem's hands within the village, which he tucked away beneath its fountain.[15]

Over the two centuries that followed their destruction, the residents of Volkumburgh would loot the ruins of the valley's colleges for valuables to either keep or sell.[14][15] Many even considered it a right of passage to look something sellable from the ruins.[15]

During the Flight of the Dragons, an adult red dragon by the name of Flashfire emigrated from the north, eventually coming to settle within the abandoned Temple of the Dragon Oracle[16] in 1358 DR.[note 3] He went on to force knowledge of the temple's location upon the inhabitants of Volkumburgh, demanding they bring him a monthly tribute in the form of five sheep. Though, even when this tribute was paid, Flashfire's gargoyle minions would still sometimes terrorize Volkumburgh Vale,[5] stealing sheep from shepherds such as Clemon.[17]

In 1358 DR,[note 2] the wizard Amelior Amanitas set up a workshop in the village in the form of a huge tower,[14] after a man named Lychor introduced him to to the fragmented legends of this golem,[11] as well as some fragments of it[18] that he managed to merge back together into an arm through use of potions.[10] Amelior's efforts to reconstruct the golem attracted the attention of the devout followers of Valmous and their neanderthal allies, who occupied the college ruins and kept the villagers from getting into them.[14]

As a result of this, over time the Awtawmatawn, the ruins of the magical colleges, Amelior Amanitas, and the arm he found all became taboo topics in the village.[14] Amelior later discovered one of the statue's feet[10] in a temple in Suzail,[11] which locals mistakenly believed to be a piece of Grumbar. In the month of Uktar, some time before the Feast of the Moon, he arranged for the foot to be shrunken down, stolen, and then delivered to him by a group of adventurers in Suzail. Estimating where the other fragments might be, he then tasked them with seeking out the rest of the fragments.[10]

Those adventurers went on to recover one of the golem's lost hands, hidden beneath a fountain in the village.[15] The discovery of this hand led many villagers to conclude that Volki's treasure had to be hidden somewhere in the village. Thus they proceeded to dig many pits and trenches within the village green.[19]

A few days after the collected parts were turned in to Amelior, the awakened Valmous and his disciples attacked the village alongside an army of neanderthals, seeking to destroy the Awtawmatawn. At the same time, Lychor unleashed a counter-force of undead in hopes of both protecting the golem and claiming it for himself. This horde of undead included a hundred skeletons, twenty zombies, and ten wights.[19] During this siege Awtawmatawn finally awakened and began to rampage around Volkumburg, destroying Amelior's workshop in the process. Both armies, as well as everyone else in the village, stopped to gawk as this occurred. Lychor then used the distraction to cast a deadly spell on Valmous and those around him, putting him out of action for the rest of the battle.[20]

Amelior would gift the adventurers a number of magic items to aid them in the battle. These included brass bottles containing his two loyal ogre servants and the djinn Hasan, a brass bottle that unleashed a ballista with twenty bolts that was manned by four zombies, three potions of growth, three potions of giant strength,[20] and a potion labeled "Drink Me If All Else Fails" that would transform the imbiber into a red dragon. Ultimately, the adventurers prevailed and the golem was destroyed after it fell upon the Crimson Wyrm and down through the cavern that was hidden beneath it.[12]

As of 1369 DR, the Crimson Wyrm had been repaired and Volkumburgh was still a rustic village of miners and sheep farmers.[8]

Despite being very isolated from the rest of interior Faerûn, the inhabitants of Volkumburgh were relatively friendly and very open with strangers. Though they would fall silent whenever one of their taboo topics came up. Any attempt to threaten them into speaking of those taboos would make them more stoic and standoffish.[3] 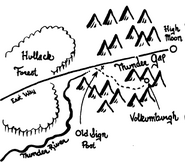 A crude map drawn by Amelior Amanitas, indicating Volkumburgh's location in the Thunder Peaks.
Add a photo to this gallery

Retrieved from "https://forgottenrealms.fandom.com/wiki/Volkumburgh?oldid=624803"
Community content is available under CC-BY-SA unless otherwise noted.