Forgotten Realms Wiki
Register
Don't have an account?
Sign In
Advertisement
in: Inhabitants with a challenge rating less than 1 (5e), Wizards of 1st level (5e), Wizards (5e),
and 15 more

Edit
This article is about the prolific traveller. For the Calishite city, see Volothamp.

listen), or Volo for short, was a legendary traveler and storyteller, and was most famous for his guidebook published by Tym Waterdeep Limited.[citation needed]

Volo was a widely traveled sage and wizard.[8] He was oft portrayed as the quintessential "go-to guy" of the Realms even if his information was, at best, half-accurate. He was too curious for his own good.[citation needed]

Volo was a wizard of moderate ability, specializing in rare and unusual spells. He was believed to have invented several noteworthy minor spells concerned with finding and documenting information. As a sage, he was primarily interested in the spells and activities of human wizards; his secondary expertise was the geography and lore of the known human realms of Faerûn.[8]

Several powerful wizards, including Snilloc, confronted Volo soon after the publication of his pamphlet Volo's Guide to All Things Magical, angered that he had revealed their spells. Their enmity sent Volo into hiding and caused him to shift most of his time and effort to his secondary interest, writing travel guides documenting Faerûn.[9][8]

Elminster edited, annotated, and provided prefaces for Volo's guides. His notes suggested amused exasperation at Volo's personality; he described Volo as an "engaging rogue"[10] and entertaining gossip[11] who was "irrepressible, nay, pompous and pretentious"[12] and given to "exaggeration, misrepresentation, and flights of fancy."[13]

In Elminster's eyes, Volo was indiscreet to the point of recklessness in documenting potentially dangerous knowledge: he described Volo's best skill as "spying and then reporting everything folk would fain keep secret for good reason."[11][13] Elminster had to heavily amend and expunge Volo's works to remove errors, distortions, and revelations that might endanger readers or Faerûn.[14] [11][13]

By the time of Volo's Guide to the Sword Coast's publication, Elminster appeared to have developed a grudging, equivocal appreciation for Volo's scholarship, conceding, "He's getting, I suppose, better. You needn't tell him I said that." [15]

Volothamp Geddarm was infatuated with cold and beautiful merchant wizard Sa'Sani during the period of time in the 14th century DR he was involved with the merchant company operating out of the Crossroad Keep near Neverwinter.[4]

“
N-no! Not replacing, good heavens no, just assisting! How could I turn down such an editor as Elminster? It would be an affront to Mystra – er – to all my fans!
”
— Volothamp Geddarm[4]

As travelling scholar and minor wizard, Volo was always on the lookout for an exposé. He all too frequently was at odds with Elminster, who preferred some things to be kept in the dark.[citation needed]

While Volo's reputation was well-earned and well-kept, there were others who tended to profit from it, the most well-known being Marco Volo, as he styled himself when it suits him, also known as Marcus Wands, of the famous Wands family of wizards. A trouble-making bard, Wands gained Volothamp's moniker after he stole an artifact from a powerful wizard, and laid the blame on the far more infamous scapegoat of the real Volo. Pursued by the mad mage and his forces, and protected by adventurers hired by his father, Marco came into his own at the finale, when the artifact was revealed as containing a god from another world, who had come to Toril along with Marco's family. The Sunstaffs, as they were known then, had, through the generations, been destined to keep the god imprisoned. Marco awakened to his destiny with the help of the adventurers, his own intuition, and the gods Tyr, Sune and Corellon Larethian.[citation needed]

Though only being a very minor mage, Volo apparently invented a spell, known as Volo's snatch.[16]

The esteemed researcher, traveler, and writer, Volothamp Geddarm, angered many of Faerûn's mages in the Year of the Serpent, 1359 DR when he published the infamous Volo's Guide to All Things Magical. Wizards felt that Volo exposed their secrets via the book and actively sought to punish the man. The Simbul of Aglarond was amused by the commotion caused by the hapless bard. She transformed Volo into a bird and made him fly into a wall as a punishment. The Witch-Queen dispensed some other magical chastisement on the writer, yet in the end, she gifted him an enchanted etched stone with a sly smile. The Simbul told Volo in a soft voice that his survival might depend on the stone's magic. She also warned the man that were he ever foolish enough to anger every spellcaster on Toril, no trinket would be enough to save his hide.[4]

In 1368 DR, Volo was visiting the city of Elturel where he engaged in a table dice game with a severe-looking northern barbarian. Coincidently, exactly at that time, the goddess of luck Tymora was affected by Iyachtu Xvim's plot to steal the powers of the goddess and her sister Beshaba. The luck powers of the goddess became running rampant through Faerûn. Volo's game was affected as the man rolled doubles eight times, driving his opponent to blind rage. With tears of terror in his eyes, Volo continued to roll doubles but escaped the livid barbarian by flinging the dice cup into his face and running for his life through the streets of Elturel.[24]

The Year of Lightning Storms, 1374 DR was marked with a voyage for the legendary (and infamous) Volothamp Geddarm. The bard boarded the Vigilant, traveling from the Crossroad Keep on the Sword Coast North to the hidden nation of Samarach on the Chultan Peninsula. Multiple strange occurrences took place during the voyage. At one point, Volo was setting to dine on a bowl of ship's soup but became distracted by a pod of dolphins. When he returned to his meal, the bowl was snatched by one of the Vigilant's crew members. The soup was thought to have gone bad, and the poisoning killed the sailor, saving Volo's life. The streak of bad luck culminated in a fierce storm that shipwrecked the Vigilant. Luckily, Volo survived, along with a handful of passengers. Soon after reaching land, the survivors were accosted by bands of local ravenous Batiri goblins. Confident in his diplomacy and knowledge of the Goblin language, Volo attempted a negotiation. Needless to say, a bloody battle followed, with the survivors emerging victorious.[4]

Subsequently, the survivors were escorted to the city of Samargol by Samarach's Elite Patrol. Despite the city being closed to most foreigners, Volo's business partner, local merchant Sa'Sani, vouched for the writer and promptly hired other survivors as members of the trade, allowing them entrance to the City of Veils. While in Samargol, Volo collected lore on the exotic jungle nation that later was collected and printed as Volo's Guide to the Serpent Kingdoms. Along with adventurers, Volo became entangled in a clandestine plot of the yuan-ti House Se'Sehen to take over Faerûn through merchant companies' infiltration. When one of Sa'Sani's aides was exposed as a yuan-ti pureblood, the group, along with Volo, was forced to flee Samarach through the hidden Lantan-Samarach portal back to the Sword Coast. Volo joined Sa'Sani and the adventurers in the Crossroad Keep from where he continued work on his guides, conducting research into cults' and bandits' activities. Volo reminded in the Keep until the snake cultists of Zehir were stopped, their plans of domination - thwarted.[4]

At some point before 1385 DR, Volo was trapped by an imprisonment spell and was released only after a century passed, some time after 1482 DR. Upon his return, he was informed by Elminster about the events of the Spellplague and the Second Sundering.[25]

After his return, Volo was hired by his rival Randilus Qelver to explore the valley of Barovia for a commission of 99 dragons. He escaped imprisonment in the demiplane by using a charm given by Elminster.[26]

Sometime in the late 1480s or early 1490s DR, Volo stayed in Port Nyanzaru to visit taverns to promote his new book and to set up audiences with the seven merchant princes. He gladly shared the latest rumors and information he overheard since arriving in town with adventurers.[19] He later returned to Waterdeep to start working on his next work, Volo's Guide to Spirits and Specters, while he waited for royalty payments for his previous book.[21]

Sometime in the 1490s DR, during Laeral Silverhand's tenure as Waterdeep's Open Lord, Volo frequented the Halfway Inn where he encountered the halfling rogue recruited by the Open Lord herself into the rescue mission for her pet baby griffin kidnapped by the Xanathar's Thieves' Guild. Volo aided the little thief in pointing him towards Skullport where the guild operated from and gave some advice on how to safely get there[27]. Sometime before that he also authored a book about adventuring and dungeons delving, Dungeonology.[23]

In the Year of Three Ships Sailing, 1492 DR, Volo traveled to the Emerald Grove in the Western Heartlands in order to study the unique behavior of a certain group of goblins. He was subsequently captured by these goblins, members of the Cult of the Absolute, and taken to their headquarters at a nearby temple of Selûne.[22] 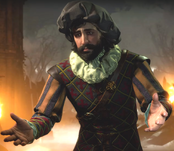 Volo, during his misadventures in Samarach.

Volothamp Geddarm—"Volo" for short—, created by Jeff Grubb,[28] is arguably one of the most lasting fictional characters for the Forgotten Realms Dungeons & Dragons campaign setting.

In fact, it was his assembling his "first" guide—Volo's Guide To All Things Magical—that put him on the "path" to making his other guides. As for Elminster, it is he who edits every guide that Volo has published, as evident in the many footnotes in each, including Volo's Guide to All Things Magical, which almost got Volo killed making it.

"Volo" is not to be confused with "Marco Volo", real name Marco Wands, of the Wands family of Waterdeep.

He has also had several adventures of his own, as told in Once Around the Realms and The Mage in the Iron Mask.