Body color is blue-gray in natural environment[1][2]
A vortex spider was an arachnid of the ethereal demiplane, the Demiplane of Time,[1][2] that rarely appeared on Toril.[3][4]

These uncommon spiders somewhat resembled a phase spider, as they'd evolved from them. Vortex spiders, though, could adapt to their environment as chameleons did, changing their color when forced out of their dwellings. Otherwise, they had blue-gray skin, the same color as the mist that perforated the Demiplane of Time, but also had splotches of dull, waxy colors.[1]

Vortex spiders wove invisible webs throughout the temporal demiplane they inhabited. As well as their ability to shift the color of their skin, which made them difficult to spot, this caused many to fall into their webby lattices. Their webs could be up to 50 ft (15.2 m) in length, making them able to cover small temporal vortices (where the crossing of timelines became possible, and thus used by travelers as temporal gateways). The webs themselves were very resilient, being fashioned from temporal energy, and any being that struck the webbing would have their movement impeded, similar to the effects of the slow spell. The vortex spider got its name from dwelling near such vortices, hidden and ready to pounce on prey.[1]

As well as sticking to temporal vortices, these arachnids could weave through individual timelines. However, this was unfavorable to vortex spiders, as without the swirling blue-gray mist, their webs were far more easily spotted. Vortex spider webs, regardless of location, required extensive upkeep.[1]

Such spiders used their temporal webs to slow foes and then strike them. They would use their vicious bite to both damage and inject an extremely deadly poison into their enemies. This poison caused instant death, except to those most resilient, who would have a chance of survival. The survivors would still take a large amount of damage.[1]

Vortex spiders survived by trapping other beings for food, whether it was other natives of the Demiplane of Time, or temporal travelers. These arachnids were not dull-witted, and would only attempt to trap prey that they could handle. The cunning spiders would often display valuable trinkets from travelers they had previously slain. Curious adventurers would attempt to move towards the item, be slowed by the web, and make themselves easy prey for such an adversary.[1]

Vortex spiders evolved from phase spiders, and some wizards believe that their appearance in the Demiplane of Time was due to a temporal accident. The wizards theorized that the phase spiders were caught in a timestorm whilst phasing, trapping them in the temporal demiplane.[1]

“
More than one unwary adventurer has grabbed at such obvious bait, only to find himself outmatched by the web's devious owner.
”
— excerpt from Monstrous Compendium Annual Volume Three

Although it was thought that vortex spiders could not escape the demiplane, they were noted to have appeared in Faerûn.[3][4]

A piece of a vortex spider's web was the material component of the chronomancy spell, temporal wall.[5] 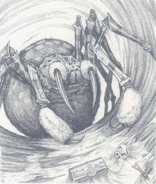