Aquan[1]
Primordial
Water elemental myrmidons, otherwise known as water myrmidons[1] or water archons,[2] were a variety of elemental myrmidon, beings created by conjuring and bonding elementals — in this case, of elemental water — into into ritually created suits of armor to act as servile weapons of war.[1][2][note 1]

Water myrmidons were beings composed entirely of elemental water, with bodies that were roughly human size and shape.[1][2]

Like all elemental myrmidons, they wore thick armor,[2][4] typically of a plate[1] or scale variety.[2] These not only protected them against attacks,[4] but contained their form and was integral to their being. After some time they were capable of removing this armor and replacing it with something else, but many never saw any need to do so.[5] Their armor was all that would remain of them when killed.[4]

Though they were capable of moving on land and would do so on ocassion as a surprise tactic, they preferred to remain near water. Being kept too far from water could affect their loyalty to a master. They also valued having frequent opportunities to spread misery and woe.[2]

Water myrmidons were immune to the effects of diseases and poisons, as they were composed wholly of elemental essence.[1][2] Also, like other elemental beings, they had no need for sleep.[6]

They were impervious to harm from water-based spells or abilities, but those that were cold-based would hinder their movements. And they were uniquely able to temporarily infuse their weapon strikes with elemental ice.[1]

Shoal reavers and tide striders both fought in close quarters, using their agility in water to their advantage, while watershapers fought from afar with their abilities. Shoal reavers would often use their water harpoons to pull creatures closer to the water before conjuring forth whirlpools.[2]

During the Elemental Evil crisis, water myrmidons and their variants were utilized by members of one of the four elemental cults responsible for the crisis, the Cult of the Crushing Wave.[7]

Like any elemental myrmidons, when left to their own devices these beings would form societies that had the same structure, one that was roughly militaristic. They were rigidly disciplined and had hierarchies based on rank, with rank determining every aspect of life in their stronghold. These ranks did not have proper titles, as water myrmidons simply knew where they and others ranked. They did not challenge authority or compete against one another for rank, each being satisfied with their station and feeling they best serve in that position.[3]

Free water myrmidons traveled on the great water ships crafted by waveshapers, engaging in pirate activity. They were known to construct outposts in lakes or swamps, which they traveled between by treating rivers and streams as highways.[2]

Outside of combat, water myrmidons spent much of their time trying to hone their knowledge of strategy and tactics,[8] engaging in tactical exercises, or sparring. Constantly training for the next conflict, which satisfied their innate desire to make war.[3]

Some said that constructing an elemental archon required a special foundry, with a special forge built in a significant concentration of elemental energy,[9][8] and a summoning crucible that served as the transformation space. These forges rarely appeared like a common forge, being unrecognizable contraptions of arcane and elemental magic.[10]

A working foundry could produce them as often as the ritual could be performed and for as long as the foundry's resources were maintained. The forge's power determine what kind of myrmidon was created.[10] A forge with ebbing power could only generate the most basic of water myrmidons, while those at high flow could produce more powerful varieties,[5] such as tide striders and waveshapers.[2]

Many were known to serve Olhydra, the evil archomental of elemental water.[11] Beyond this, they often found themselves in the service of masters who were like the ocean quite destructive and unpredictable in nature, such as aboleths or human pirates.[2] 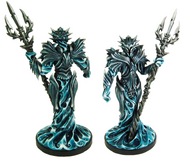 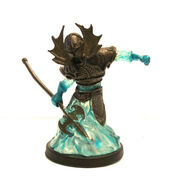 A shoal reaver water archon, as depicted in the D&D Miniature's set "Lords of Madness"

A water archon stands alongside an earth archon, a fire archon, and an ice archon.