The Lost Caverns of Tsojcanth

Wyrd
A water weird was an elemental weird that was conjured to protect a pool of water.[1] They were renowned for their power as diviners in matters related to healing.[2]
“
Before you drink from a fountain or pool, toss a copper coin into it. It's a small price to pay for your life.
”
— X the Mystic's 2nd rule of dungeon survival[1]

The upper half of a water weird typically appeared like a beautiful, translucent, blue female humanoid composed entirely of water, but the lower half could appear serpentine or like a column of water rising from the pool.[2]

Water weirds were considered very intelligent creatures.[4] They were capable of being either very noble or evil, depending upon the state of the water that they guarded.[1]

Water weirds fed off the essence of other creatures, though how was unknown.[4]

Due to their bodies being composed entirely of water, fire-based spells were ineffective against them while cold-based spells would slow their movement. The spell purify water was also known to be very deadly towards them.[4]

Water weirds generally fought by striking out at their opponents with their serpentine form, paralyzing them. They would then drag the opponent into the water and attempt to drown them.[4]

On the Prime Material plane, water weirds were occasionally found in the seas and ocean around the Moonshae Isles.[6]

Some acted as servants of the marid Kalbari al-Durrat al-Amwaj ibn Jari in her Citadel of Ten Thousand Pearls.[7]

A nereid with a water weird.

An air weird and a water weird. 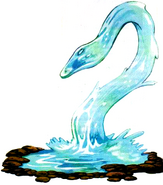 A water weird and an air weird.

A human and a halfling with a sling fend off a water weird. 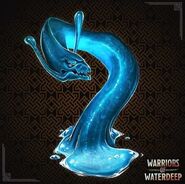 A depiction of water weirds from Warriors of Waterdeep.

A water weird destroying a pier, as depicted in Alchemy Horizons: Baldur's Gate.

Beneath the Fetid Chelimber • Boltsmelter's Book • Dungeon #33: "Mad Gyoji" • Dungeon #70: "Ssscaly Thingsss" • Foulness Beneath Mulmaster • Mulmaster Undone • Out of the Abyss • The Drowned Tower • Waterdeep: Dungeon of the Mad Mage