Centaurs
Zulu people of KwaZulu-Natal.[citation needed]
A wemic (pronounced: /ˈwɛmɪk/ WEM-ik[9] or: /ˈwimɪk/ WEE-mik[9]) was a creature with the upper body of a humanoid and the lower body of a lion. Like centaurs, they had six limbs and were considered "tauric" creatures.[7]

Wemics were larger and stronger than humans, and could make great leaps with a running start. Both their humanoid hands and feline feet bore claws, with their fore claws being extremely sharp. They had keen eyesight, including darkvision, and exceptional hearing. The humanoid part of wemics had feline characteristics around their eyes, ears and nose with pointed teeth, and their entire bodies were covered in golden fur, save for their white underbellies and black-tipped tails. Males had thick, black, lion-like manes.[10][1]

The tauric wemics were known as excellent hunters, fighters, and tacticians who preferred to strike from ambush. They could fight with both pairs of claws while at the same time wielding weapons, which they made from stone and wood.[1] Any metal or magical armament were typically looted from monsters or creatures they had killed.[11]

Wemics were a nomadic species that did not make settled homes, but formed patriarchal prides, following the herds they hunted for food.[7][8] Their prides were typically served by a spiritual leader, often a druid. Sometimes, a number of prides would band together to form a single tribe, led by a chieftain.[1] During times of imminent danger, a number of prides united into a nation, and a king was chosen from among the chieftains of the prides to rule over the greater collective. Such a congregation hadn't occurred in generations as of the mid-to-late 14th century DR.[11]

Some wemics lived solitary lives, like those found in the Dalelands, and shepherded flocks of sheep and other livestock through the region's rolling pastures.[12] Others would hire themselves out as mercenaries, trackers or wilderness guides, often seeking magical weapons as compensation for their services.[1]

Wemics spoke their own, lion-like language. Most also spoke Common, but with a thick accent.[4]

Wemics mated whenever was most desireable or convenient. Pregnancies lasted about 10 months and bore litters of one to three cubs, who were born with few survival instincts and camoflauged coats which faded after a few months. Cubs were fully grown by around three years of age.[4]

Some people were known to pay for wemic cubs with the intent of raising them as servants. The price for a cub in the mid-to-late 14th century DR was about 500 gold pieces.[4]

Wemics could be found in many lands of Faerûn,[1][13][2] such as the Stonelands and Goblin Marches north of Cormyr,[14] Pelleor’s Prairie in the Backlands, the Shining Plains of Turmish,[1] the Dalelands,[12] and in great numbers in the grasslands of the Shaar.[13]

While wemics were often represented as barbaric, illiterate, and uncivilized creatures, they were quite intelligent and made stone weapons and tools, as well as clay pottery.[11] They were famous for being highly superstitious. Others would describe wemics as nature-oriented people with a rich tradition of oral history.[2]

They lived close to the land, in tune with its magical forces[2] and in harmony with the nearby populations.[10] While they held few opinions about other races, they were extremely careful not to over-hunt and would become enraged when humanoids hunted an animal of Toril for a small part of its body, such as a horn or other trophy, then leave the carcass for carrion.[16] Ironically, the claws of wemics were prized as decorations by the bullywugs of Faerûn, and the hair of wemics were used in the creation of brooms of animated attack.[12]

Within wemic prides, the females typically outnumbered the males three-to-one, including the younger cubs,[1] who were tended by the females. When they weren't looking over the young, females spent the days scouting or hunting while the males slept. The males of a pride stood guard over their kin at night, protecting them from nocturnal dangers.[10][17] All wemics were trained from a young age to fight and defend themselves.[12]

Young wemics would remain with the rest of the pride until they were five years old, at which point they would go on the first hunt. Once they brought back their first kill, they were considered an adult.[10] Older wemics who were too old to hunt, would either remain within their camp, crafting and maintaining weapons and armor,[17] or wandered off to the nearest humanoid settlement for a new life, so that they would not slow down their kin.[10]

The nomadic wemics of the Shaar would form a series of isolated campsites along their seasonal migratory paths. They hunted the nearby pack herds for a given amount of time before rotating to the next camp, allowing other prides and occasionally the local loxo herds to use the temporary settlements in their absence.[8]

Many wemics of the Shaar worshiped the lion-god Nobanion, and their shamans led tribal celebrations such as the festival of the Pride.[18] However a few of the more savage of their kind venerated Malar, the Beastlord.[19]

Adventures
Curse of the Azure Bonds • Dungeon #47: "The Assassin Within" • Book of Lairs • The Return of Randal Morn
Novels
Realms of the Arcane, "Secrets of Blood, Spirits of the Sea" • Evermeet: Island of Elves • The Magehound
Organized Play & Licensed Adventures
Marauder's Spear 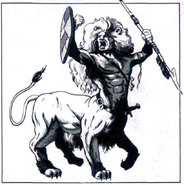 A wemic ready for battle.