Black,[6] white[4]
Wild Hunt hounds,[4] also known as fey hounds[2] or Cwn Annwn (pronounced: /kuːn ˈɑːnuːn/ coon ANN-oon),[1] were a magical variety of hounds that originated in the Feywild,[4] a culmination of centuries of training and magical alteration.[3] As their primary name implied, most members of this breed served Cerunnos in his Wild Hunts,[6][7] an entity that uniquely had power over the breed.[8]

These hounds were quite large,[4][6] often standing up to 4 feet (1.2 meters) at the shoulder[6] or in some cases as large as a grizzly bear.[3] They had coats of fur ranging from black[6] to white.[4] Their coats glittered slightly, as if covered in a sheen of starlight,[3] with blue runic script hovering over them.[4] Their eyes glowed a fiery green[4][6][7] and their tongues were like green flames, but did not impart pain like real fire, which gave them an eerie glow.[6][note 1]

These hounds had an average level of intelligence.[4][3][6] Some described them as being quite ferocious and bloodthirsty.[3]

Much like Cerunnos, these hounds would fight to the death against evil creatures.[7] However, they generally avoided attacking a hunted creature until all those who had been drawn into the Wild Hunt had a chance to do so themselves.[6]

They could invoke fear in any mortal they were pursuing,[7] what some described as being a sort of fear aura, caused by them constantly growling.[4] Like many creatures of fey origin, they were susceptible to weapons made of cold iron. They could also see in areas of complete darkness[3] and areas of low-light, and could fly to some degree,[4][3] though they were quite clumsy while doing so.[4]

Some of these hounds temporarily imparted an effect similar to the dimensional anchor on those they bit or imparted more damage upon those bit outdoors under a moonlit sky.[3]

Those that were properly part of Cerunnos's Wild Hunt pack had a number of unique abilities. They had an aura around them equivalent to the protection from evil spell at all times, they could make their flaming tongues cause additional pain, and they could never truly die.[7] Instead, when killed on a Wild Hunt their bodies disappeared,[6] then reconstituted at Cerunnos's home.[7]

Wild Hunt hounds struck their foes with hit-and-run attacks in order to harry and separate their them from any allies they may have.[4]

In approximately 1357 DR,[note 2] the goddess Hecate sent her jester out to the World Serpent Inn to acquire some suitable adventurers to obtain for her a Wild Hunt hound, wanting to crossbreed it with her hell hounds. He ended up choosing a group of adventurers from Faerûn,[9] bringing them through a portal to a cold and foggy moor where they were quickly set upon by Cerunnos and a pack of twenty of his hounds. He chased them for hours, until the adventurers came across the true objective of the hunters — a graveyard full of ghouls lead by a ghast, deterring bodies from the ground. The hounds dispatched all of the ghouls, then were cared for by Cerunnos.[10]

When the players approached Cerunnos and explained their desire for one of his hounds he initially gave a silent refusal, twisting his face, snarling, and brandishing a sword. He then threw the sword and a tin hunting horn to the ground, revealing that sometime prior he lost his spear and true hunting horn. He then had one of his hounds bring him a raven, which was feasting upon one of the dead bodies, and impaled it with the sword.[10] Pantomiming to them that the deity known as Raven had taken them and he would gift them one of his hounds if they returned the items to him.[11]

Raven in turn would ask of them to acquire a piece of art from the recently reclusive Enki. From him they would learn of how Hecate had imprisoned the Faerûnian goddess Lliira. They then went on to free the goddess of revelry and offered the Wild Hunt hound to Hecate in return for her removing a curse she laid upon Lliira.[9]

Following the fall of Celadaine from grace, the tower became overrun by dark fey creatures that had command over some fey hounds.[2]

Portal hound
A variant of fey hounds that were incapable of flight, but had the ability to teleport at will. They were utilized as hunting companions by both adventurers and individuals in the Feywild. As of the late 15th century DR, they could be purchased from certain agents in the city of Neverwinter on the Sword Coast North. However, availability by these merchants lasted for only a limited amount of time.[2]

Some of these hounds could speak Sylvan,[3] though generally they spoke no language.[4][6]

Wild Hunt hounds that didn't serve Cerunnos worked tirelessly as guard animals at the manors of eladrin nobles[4] and accompanied them on their own great hunts,[4][3] which they were known to refer to as "Wild Hunts."[3]

Cerunnos and his hounds watch as a sacrifice is made in Tir na Og to the Celtic pantheon. 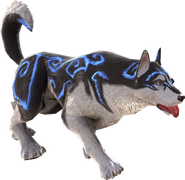 A Wild Hunt hound, as depicted in the video game Neverwinter .