Will-o'-the-wisp (English)
Will-o'-wisps were malicious creatures that appeared as torches or lanterns seen floating through swamps.[4]

The will-o'-wisp appeared to be nothing more than a hazy ball of light, colored white, blue, violet, green, or yellow, glowing as brightly as a flaming torch.[4][6] As such, it was easy to mistake one for a lantern, torch, or dancing lights.[6] Especially within the foggy marshes they tended to inhabit.[4] They tended to take on a blue, violet, or pale green hue whenever they were engaged in combat.[6]

In fact, their faintly glowing bodies were just transparent balls of spongy matter, measuring 1 foot (30 centimeters) wide and weighing around 3 pounds (1.4 kilograms). Although they had no vocal organs, will-o'-wisps could vibrate to emit a ghostly sound, with which they could speak.[4]

These creatures could alter the brightness or dimness of their bodies' glow. This ability was used to confuse their prey.[6] A will-o'-wisp could even extinguish its glow, becoming for all intents and purposes invisible[4] to all except creatures who see invisible objects.[6] They typically did the latter whenever they were surprised or frightened.[4]

Will-o'-wisps had total spell resistance, making them immune to most spells, apart from magic missile, maze[4] and protection from evil.[6]

These creatures displayed exceptional levels of intelligence.[6] They reveled in luring travelers away from safe paths, bewildering them.[4]

A will-o'-wisp would avoid combat if at all possible, but would attack with electric shocks if pressed.[4]

Will-o'-wisps were typically found singly, in pairs, or in "strings" of three or four orbs.[4][6]

These creatures subsisted upon the powerful emotions that are associated with fear, panic, and death.[4][6][note 1] They would often seek to lure creatures away from safe paths,[4] into perilous situations so they could feast upon their desperate emotions.[4][6]

Will-o'-wisps were typically found in deserted, dangerous places where ones movement could get inhibited. Such as bogs, fens, swamps, as well as swampy dungeons and dungeons full of quicksand or pit-traps.[6]

On Toril they were known to be inhabit the Vast Swamp, where they were often sighted from the Way of the Manticore.[8][9][10] As well as its counterpart in the Plane of Shadow, the Shadow Swamp.[11]

They also harassed travelers in the Glaun Bog of Tasseldale.[12]

Some will-o'-wisps served the dark Chultan demigod Eshowdow, and their appearance was seen by his followers as a sign of his favor.[13]

A squadron of will-o'-wisps once occupied Durlag's Tower in the Western Heartlands, but found themselves utilized as a part of the tower's own defenses.[14]

In early Eleint of the Year of Lightning Storms, 1374 DR, a will-o'-wisp cooperated with the Sharran cultists at the Lost Refuge in the Vast Swamp. It posed as a torch outside the gatehouse and haunted the surrounding swampland, while helping to defend the base from intruders. It was presumably destroyed by adventurers in service to Mystra when they assault the base.[15] 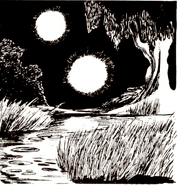 A will-o'-wisp from 2nd edition.