Lupine humanoid[1][2]
A wolfwere was an antherion whose natural form was a wolf and could transform into a humanoid or wolf-humanoid hybrid.[1][2]

These exceptionally smart creatures were hateful, being the bane of humans and humanoids. They relished brutally slaying them, most often by surprise. Wolfweres could shapechange into very charismatic humanoids (and particularly chose the opposite sex of their victims), so that they could lure others into ambushes. These antherions much preferred their native form, that of a large wolf, which was essentially a dire wolf.[1][2]

Many of these creatures would carry string instruments, such as lutes, often seducing creatures and causing lethargy. Here the wolfweres' targets would become slowed and unable to stop the effect.[3]

When wolfweres struck, they reverted to their hybrid forms, in which they could utilize the powers of both humanoids and wolves. In this form, they would attack their prey with both a vicious bite and with weapons. Wolfweres often used axes or swords. If forced to fight in human form, wolfweres might try to escape to shapechange into their hybrid form.[1][2]

These antherions could only be struck by cold iron or magical weapons. They were sickened by belladonna, and chose to avoid it whenever possible.[1][2]

Wolfweres were almost always lone hunters, and it was very rare to find them in groups of more than three. However, during mating times, multiple wolfweres could attack at once.[1][2]

Beyond the Prime Material plane, wolfweres could be found in the Domains of Dread.[4]

Despite not often being found with other wolfweres, they often took the company of evil wolf creatures, such as worgs. The wolfweres would influence these creatures, as well as ordinary wolves, to take an evil path.[1][2] 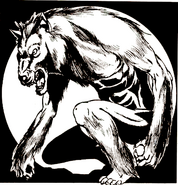 A wolfwere from 2nd edition.