J. R. R. Tolkien's wargs
A worg was a type of magical beast that resembled a normal wolf but was larger, intelligent, and had a fiendish countenance and glowing eyes.[citation needed]

A worg resembled a typical wolf, though much larger and bearing an intelligent, wicked gleam in its eyes. They had gray or black fur, and on average stood 3 feet (0.9 meters) high and were 5 feet (1.5 meters) long. They weighed around 300 pounds (136 kilograms).[citation needed]

Despite their higher intelligence and evil traits, worgs tended to act, for the most part, like regular wolves. They often hunted in packs, but sometimes hunted alone. Lone worgs tended to hunt creatures smaller than themselves, while mated pairs and packs hunted larger game. They preferred large, herbivorous animals, usually the young, sick, or weak, but weren't afraid to take humanoids, especially when other prey was scarce.[citation needed]

In any number, worgs employed similar tactics. They would stalk humanoid prey for a number of hours or even days, choosing the best of time of day and terrain for the attack. When they did, they employed hit-and-run tactics to exhaust a victim, until finally the whole pack went in for the kill. If they outnumbered a victim or were especially impatient, they might try to corner the prey, then attack.[citation needed]

They attacked with their teeth. Like a wolf, they could bite their prey and try to bear them down to the ground.[citation needed]

They also had the benefit of stealth, keen senses, and the ability to scent prey.[citation needed]

Unlike most animalistic creatures, worgs could speak. They could speak both Common and Goblinoid, as well as a language of their own.[citation needed]

Worgs were sometimes enslaved by orcs, goblins, and other such creatures to act as mounts or attack dogs. And sometimes they were specifically being bred for these purposes.[6]

Worgs were known to act as servants of the deity Garagos.[7] 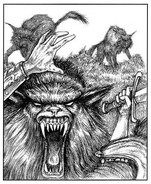 An adventurer and a pack of worgs.