Wraith (Scottish)
A wraith was an undead creature born of evil and darkness, despising light and all living things. They could drain the life from living creatures, turning them into new wraiths upon death. Wraiths were powerless in natural sunlight, appearing as a sinister, spectral figure robed in darkness. They had no visual features or appendages, except for their glowing red eyes.[citation needed]

“
“Death,” said a shape that had assumed Brenna’s form. The thing’s haunting tones seemed at once to come from behind and in front of her. “We are death shrouded in darkness. Sweet, sweet darkness.” The thing laughed again, the sound echoing in the night until it finally receded like a tide. “Sweet death,” another of the strange creatures echoed. Then another and another took up the phrase until the words blended together and sounded like a swarm of insects.[7]
”

Wraiths became far weaker when under the exposure of full sunlight.[5]

Like many undead, wraiths possessed a chilling touch. However, these beings were most similar in nature to the undead known as wights. Both could drain creatures of their life energy and could only be harmed by either silver or enchanted weaponry.[5]

In 1479 DR,[8] wraiths, moon wraiths, and wisp wraiths could be found in the company of Shadovar.[9]

Moon Wraiths
a crescent-shaped wraith that arose from lycanthropes who had died while in the midst of transforming.[10] They used hit-and-run tactics, flying through their enemies in a crescent arc as often as they could.[11] They were more powerful when under the light of the moon or stars.[10][11]
Wisp Wraiths
a type of wraith that resulted from humanoids killed by a wraith failing to form correctly into a true wraith.[10] These were weaker than other types of wraith. They typically crowded around their opponents, using their necrotic powers to slow them down.[11]

Though they could be found on the Prime Material plane, wraiths were far more prominent in the Negative Energy plane. They were typically encountered in places that were dark and gloomy, away from the debilitating rays of the sun.[5] Beyond that, they could be found in the Domains of Dread.[12][13]

Being a type of undead connected to Negative Energy plane, wraiths acted as servants of the deities Jergal,[14] Kiaransalee,[15] and the Chultan demigod Eshowdow.[16]

Some were known to use the dust left behind by destroyed wraiths as a material component for the spell wraithform.[17] 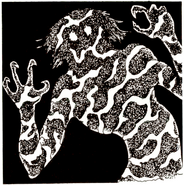 A wraith from 2nd edition.

A depiction of a wraith from Idle Champions of the Forgotten Realms.