The Gates of Firestorm Peak
Wystes were vaguely worm-like aberrations from the Far Realm.[5]

Wystes were typically 2 feet (0.61 meters) in diameter and 25 feet (7.6 meters) long. Their skin was translucent, showing the bizarre strands of undulating organs inside of the creature. The "head" consisted of a sucker mouth ringed by claw-tipped tentacles.[1] Wystes had no eyes[2] nor needed to breathe.[5] The clawed cilia that crowned the creatures' sucker hole were the main sensory organ that functioned as weapons and feeding appendages.[2]

Wystes were aggressive and territorial creatures[2] who acted purely on instinct, attacking anything that came close.[1]

The worms could sense prey via their blindsight at the distance of 120 feet (37 meters) and were unaffected by acid.[1]

When sending prey, wystes launched themselves at the targets, jumping 15 feet (4.6 meters) out of their putrid habitats. Oftentimes, they attacked as a group, and the sound of the battle attracted other hungry wystes from the surrounding areas. Their appearance could be misleading as they moved lightning-fast. When prey ended up in a wyste's maw, entangled in its cilia, the worm dragged the meal underwater. A wyste slowly consumed the target unless the carcass was lost to its hungry kin. However, even if prey managed to break away from wystes' grapple, they were very likely to drown in the murky pools, poisonous to any creator not from the Far Realm or changes by its foul influence.[2]

Wystes were native to the Far Realm but could be found in underground pools of alien opaque blue slime on the Material Plane thanks to gates to that maddening plane.[2] They were preyed upon by dharculus.[5]

Wystes could be found dwelling in the settled lands of the Upperdark in Underdark.[3] Outside of the Prime, wystes inhabited the 222nd level of the Abyss - Shedaklah.[4]

Wystes lived in schools of between two to eight individual worms. Some sages believed that wystes were very similar to aquatic worms or leeches. When submerged in the poisonous alien goo, they did not need to breathe (some believed they could simply remain submerged for great periods of time). Even so, the worms were able to move about on land, slowly slithering along the ground, however, never too far from the slime pools.[2]

The slime that housed the worms was not produced by them but was created by two other alien creatures that wystes lived in a symbiotic relationship with. The first creature was a sleek black bulb tooted to cavern floors and ceilings. The second was a roughly dog-sized lump of white hue that crawled across the same terrain and the black bulb creatures. The white blobs feed on the black creatures. Occasionally, their pale bodies opened up a dark orifice and discharged the blue poisonous goo that wystes inhabited. This symbiosis was of grave importance to wystes' existence. If the blobs that secreted the blue goo were killed and goo removed, the worms could only survive for one month.[2] 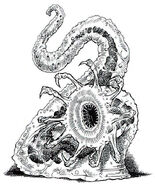 An early depiction of a wyste.

A slithering cluster of wystes.