listen) was a large winged lizard, distantly related to the dragon, with a poisonous stinging tail and sharp teeth.[9][5]

These creatures varied in length from 15​ to ​35 feet (4.6​ to ​11 meters), weighed around a ton, and were covered in dark brown or grey scales. They typically had either red or orange eyes[6][5] and their jaws were filled with long and sharp teeth.[6]

Unlike true dragons, wyverns only had a pair of hind legs instead of a set four. Their wingspan could get over 50 feet (15 meters) in length.[6] And their tails were often quite long,[5] comprising almost half of their bodies,[6] yet very mobile.[5] These ended in a thick cartilage knot with a stinger protruding out of it, not unlike that of a scorpion.[6]

Telltale sounds that these creatures produced included loud hisses and throated growls, similar to the vocalizations of alligators.[6]

Wyverns were aggressive and not greatly intelligent.[6][5] They were not averse to attacking anything less powerful than themselves. Their sleek, strong legs proved very useful for an attack.[3][note 1]

When fighting these creatures would dive down from above, grabbing prey with their hind leg claws, and then attempt to sting them to death. They were also known to slash at creatures with their claws mid-flight.[6] Their tails were so long that opponents were typically struck by a wyvern's tail before their legs.[5]

Wyverns can be both solitary and group animals. They did not have a strong odor, although their lairs often could be tracked by following the smell of their recent kills.[6]

Despite their middling intelligence, wyverns were fluent speakers of Draconic.[6]

These creatures were typically found in areas that were favored by dragons, such as tangled forests or large caverns.[5]

Many were known to inhabit the Forest of Wyrms,[11] as well as the Cloak Wood forest.[12]

On the Chultan Peninsula, wyverns were a common sight in the jungles of the nation of Samarach.[13]

Wyverns were used as mounts by various races and cultures, including Zhentarim skymages[14] and the extradimensional marauder Imgig Zu.[15]

The black dracolich Hethcypressarvil kept a pair of wyverns as pets at his lair in the nameless swamp of the Dragon Coast.[16]

The dried blood of a wyvern was one of the components used in create darkenbeast spells.[19]

Some wyverns served the dark Chultan demigod Eshowdow, and their appearance was seen as a good sign by his followers.[21]

House Dlardrageth, a powerful sun elf family from Arcorar that corrupted their bloodline by breeding with fiends, used the image of a golden wyvern against three red crossed swords as their house's insignia.[22]

Expensive wyvern whiskey from Nimbral had a wyvern scale floating in every bottle.[23]

Imgig Zu rides his wyvern through the wall of Ostus's Hold. 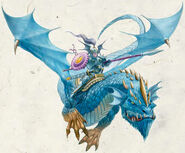 A wyvern being used an aerial mount.

A giant dead wyvern in Cloakwood as depicted in Baldur's Gate. 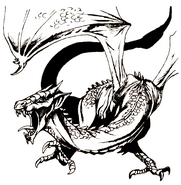 A wyvern from 2nd edition.