Xonthal's Tower was a tower in the Western Heartlands that housed the wizard Xonthal after 1361 DR.[1]

The tower became famous in the Realms for its unusual magical defenses, including the magical hedge maze that surrounded it.[2]

In 1365–1366 DR, a group of Zhentarim under Hansibal Droun, a shopkeeper of the village near the tower, tried to conquer it for its strategic commercial value. However, Xonthal always defeated them.[3]

Just before the Tyranny of Dragons, the Cult of the Dragon managed to acquire the tower.[1]

During the Tyranny, the Cult's leaders based at the Tower were the dracolich traditionalists Jorgen Pawl and his lieutenant Iskander.[1] 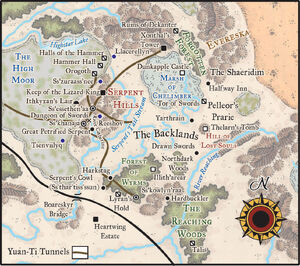 Map showing location north of the Marsh of Chelimber.
Add a photo to this gallery

Retrieved from "https://forgottenrealms.fandom.com/wiki/Xonthal%27s_Tower?oldid=520029"
Community content is available under CC-BY-SA unless otherwise noted.