Yeti (Tibetan)
Yetis, also known as tundra yeti,[12] were large, white-furred humanoid creatures that could be found in arctic climates.

“
Twice as tall as a man and thrice as wide. Claws and fangs like daggers. Reminds me of me, now I think of it, except for the claws and fangs of course.
”
— Voghiln the Vast[13]

Yetis appeared as a cross between a human and a bear and walked upright. Although they were usually white, their fur turned brown in the short summers of the north.[12] Yeti had an extra, translucent eyelid that allowed them to see clearly in a snowstorm.[3]

Yeti were hard to find, although one could find evidence of their passing. In the summer, they hid in long grass; in the winter, they hid in the snow. They were always hungry and apt to attack anything that moved.[12]

Yeti could be tamed by the most dedicated (or fearsome) of keepers.[14][12]

Yeti stalked their prey and were most likely to set ambushes, using the color of their fur as camouflage. Once the fighting began, yeti fought fiercely with their claws and strong grips.[3] Anyone caught unawares by the yeti were unable to keep from looking them in the eye, which paralyzed the unsuspecting victim for brief time.[14][12] Because of their fur, yeti were not affected by cold attacks, but they were very susceptible to heat attacks.[5]

A variety of the regular tundra yeti was the gargantua yeti, which were 20 feet tall and had sky-blue fur. A clan of territorial gargantua yeti lived in the easternmost mountains of the Tuutsaas Chain in the Great Glacier.[15]

Icewind Dale was perhaps most known for its yeti, which were said to outnumber people.[7] Narfell was also home to tundra yeti,[10] and so were the peaks and high valleys of the Spine of the World.[8]

Historically, yeti lived in the Novularond region of the Great Glacier, but they were pushed out by frost giants to the neighboring region of Nakvaligach (although a number of yeti remained in the Esenovularond peaks[19]). In Nakvaligach, white dragons allied with the local yeti, who served the dragons and even rode astride their backs.[9]

Yeti oil could be used as a poison.[20] Yeti teeth and claws could be sold as trinkets, whereas yeti fur was highly valued for its heat-retaining characteristics.[5][21]

In 1281 DR, Mirek of Kuldahar and his brother were visiting the Vale of Shadows outside of the town when they encountered a tribe of yeti, which attacked the two men. His brother was killed, but Mirek was able to flee back to Kuldahar, followed by the yeti, who proceeded to invade the town. A visiting group of outsiders trapped in Kuldahar by an avalanche helped the townspeople to successfully repel the invasion.[22]

In 1368 DR, Philyra, a druid member of the Society of Stalwart Adventurers, defeated a yeti during one of her expeditions and gifted the beast's body to the club house in Suzail to be preserved and displayed among Stalwarts' many other trophies.[23]

The tundra yeti of Narfell were sometimes misidentified as dire apes adapted to cold climates.[10][note 1] 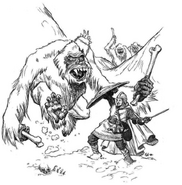 Depiction of a yeti in the game Neverwinter. 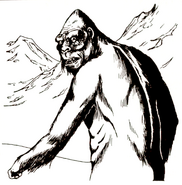 A yeti from 2nd edition.