Fiend Folio 3rd edition
Yuan-ti anathemas were the result of a ritual that transformed a yuan-ti abomination into a larger, more powerful and more aggressive creature.[1]

Anathemas were immortal and considerably larger than abominations, with claw-like hands and six snake heads.[1]

Anathemas avoided melee combat when possible, preferring to leave such matters to their yuan-ti followers. While their minions attacked an enemy, anathemas remained a safe distance behind but close enough to attack with their magical and psionic abilities.[3]

If they were forced into one-on-one combat, in addition to using their powerful abilities, they grabbed onto an opponent and constricted them, crushing the life from them. They also attacked using their fangs, delivering a powerful poison.[3]

Anathemas had the innate ability to duplicate the effects of animal trance, cause fear, deeper darkness, entangle, haste, neutralize poison, suggestion, polymorph other and unholy blight spells three time a day; blasphemy and unholy aura once per day.[4]

Anathemas were able to change their form into a viper of various sizes. They also had the ability to camouflage themselves and anything they carried to blend in with their surroundings. During melee combat, while holding onto an enemy, anathemas could excrete a powerful acid from their skin.[3]

Anathemas were able to cause fear of snakes to any creature within 30 ft (9.1 m). They had an excellent sense of smell and due to their six heads, were able to see in multiple directions at once. This made it nearly impossible to sneak up on an anathema without magical or psionic aid. Anathemas were able to regenerate any damage inflicted by a weapon.[4]

Anathemas were incredibly rare and held a unique position in the usual yuan-ti caste system. Anathemas did not live among other yuan-ti, as their presence within a yuan-ti city was so powerful it lead to societal and structural collapse. As a result, they lived alone outside yuan-ti settlements.[4][5]

As anathemas were usually considered divine beings of Sseth, other yuan-ti organized cults around a anathema. Sometimes an anathema thought of itself as the living avatar of an elder god or even a new god entirely. Anathemas were considered by their followers to be the pinnacle of the yuan-ti race.[1][4][6]

The ritual that transformed an abomination into an anathema was cruel and painful, involving the sacrifice of hundreds of snakes and requiring the abomination to bathe in the blood of its enemies. Some yuan-ti disliked the idea of creating a new anathema because they were far more aggressive and brutal leaders than abominations.[1]

After a graft, the anathema was exhausted and required rest. The anathema was vulnerable while in this state as they were unable to defend themselves physically, use any spells or innate abilities or engage in any task that was mentally or physically demanding.[4]

Anathemas created the special potion that transformed humanoids into broodguards and tainted ones.[4] 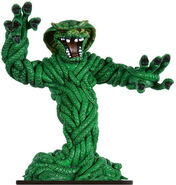 A yuan-ti anathema from the D&D Miniature's set "Against the Giants."