Yugoloths (pronounced: /ˈjuːgoʊloʊθ/ YOO-go-loth[5]), which were also often called daemons (pronounced: /ˈdeɪmʌnz/ DAY-munz[6]) or nicknamed loths,[7]) were neutral evil fiends native to the Blood Rift. They were neutral in the affairs of the other fiendish races, interfering only when they saw a situation that might be profitable or a potential for the advancement of their own schemes. The yugoloths were manipulative, secretive, and mercenary by nature, often acting as soldiers for deities in their own private wars, or even at times aiding both sides of the Blood War.

The yugoloths presented themselves as simply greedy mercenaries, willing to sell their services to both sides, while behind that public face, the members of their highest castes viewed the entire course of the conflict as their own thing to control and manipulate until they decided to end it, unify the Fiendish Planes, and turn their attention to the planes of Good.

Like the tanar'ri and baatezu, the yugoloths had their rulers: the baernaloths, who were believed to be their progenitors. Below the baernaloths was the ruler of Khin-Oin, who is given the title of Oinoloth.[9]

Yugoloths craving more power sometimes made a pact with night hags who would transform them into unique and powerful creatures, the altraloths. The most prominent altraloths were the former Oinoloth Anthraxus, and Charon, the boatman of the River of Blood, who ferries souls down the river for a steep price.

In −1200 DR, a group of Netherese arcanists summoned a trio of nycaloths (Aulmpiter, Gaulguth, and Malimshaer) to test the defenses of the elven realm of Cormanthyr. The nycaloths, who served Malkizid and became known as the Khovanilessa (which meant the "Trio Nefarious"), caused a great deal of damage before Cormanthyr's high mages succeeded in imprisoning them with epic magic.[11]

Unfortunately for Cormanthyr, the prison did not hold forever. In 708 DR, the flight of the elven-raised red dragon Garnetallisar over the realm inadvertently fulfilled one of the conditions of their release, weakening the magical barrier enough that a gnoll shaman could summon them. The Trio quickly moved to exact vengeance on the elves, raising the Army of Darkness and invading northern Cormanthyr in 711 DR, sparking the Weeping War. The next year, the Army of Darkness crushed a force of Harpers at Twilight. Garnetallisar struck back, causing some damage but vanishing in the midst of the fight.

The war raged on. In 713 DR, Cormanthyran forces killed Gaulguth and Malimshaer, but the Army continued to advance on Myth Drannor; its citizens began to evacuate. Taking advantage of the war, drow forces attacked and recaptured the Twisted Tower.

The war ended in disaster for the elves in 714 DR, when Myth Drannor fell. The only good that came out of this came when Captain Fflar Starbrow Melruth slew Aulmpiter, the final member of the Trio Nefarious. The seat of power in Cormanthyr returned to the Elven Court, and the nation was barred to non-elves.[12]

War of the Spider QueenEdit

The ultroloth Inthracis mustered the majority of his army at the behest of Vhaeraun to kill Lolth's Yor'thae, thus preventing her elevation to greater power. He and his army failed in their task, and Inthracis himself was killed by Pharaun Mizzrym but was resurrected using one of his Stasis clones that he kept on the Blood Rift[13].

A subgroup of yugoloths known as battleloths, they were creatures that took the shapes of various weapons. 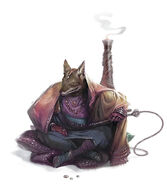 A raavasta, which was a type of yugoloth descended from arcanaloths.
Add a photo to this gallery