Zhjaeve was a githzerai planewalker who famously traveled to the Prime Material Plane to do battle with the King of Shadows at the Kalach-Cha's side.

Like other githzerai, Zhjaeve had green skin which was stretched tightly across her facial features, accentuated the lines of her bones, slender features, and unusually long fingers. Her alien features carried over also into her subtle body language, including her tendency to watch those she was interested in silently with grey-yellow eyes, for purposes that were often hard to read. Additionally, her appearance was more than a little similar to that of a githyanki, though with slightly rounder features, often causing some confusion and resulting in occasional cases of mistaken identity.

Zhjaeve was a stoic and unassuming individual whose dedication to her goals was absolute. Because of her role as a zerth amongst her people, Zhjaeve had a mental discipline that was not easily equaled. As a result, she sometimes seemed to lack emotion and act purely on logic, though this was not actually the case. As a result she often grated against Ammon Jerro, who did not trust her and whose skepticism was returned by the githzerai. On the affairs of the Prime, Zhjaeve had a disjointed and outside perspective, and was not afraid to voice her opinions on these matters. In speech she had the unusual idiosyncratic practice of prefacing her statements with the word "know," a practice sometimes considered typical of githzerai.

Not much of Zhjaeve's early life is known, though it seems that Zhjaeve is indeed quite ancient as inhabitants of the Prime measure time, since she evidently knew Zerthimon, the founder of the githzerai offshoot of the Gith and both former friend and archnemesis of Gith, founder of the githyanki. This makes her several thousand years old at least.

During the Shadow War, Zhjaeve was assigned to investigate the githyankis' recent interventions on the Prime, whose attention had been drawn by the Kalach-Cha. Discovering the origin of the Githyanki's troubles, Zhjaeve continued her investigations further, leading her to discover Black Garius' hidden base within the ruins of Crossroad Keep. There, she was imprisoned alongside Aldanon, a wizard of Neverwinter, as it was hoped by Garius and his followers that Zhjaeve could reveal to him much about the King of Shadows, whom Garius planned to betray, as well as the Silver Sword of Gith and its fragments.

However, Zhjaeve revealed little of use and before Garius could bring his plans to fruition the Kalach-Cha laid an assault on Crossroad, interrupting the ritual and killing Garius. Zhjaeve, suspected a Githyanki spy, was taken prisoner, though ultimately she would reveal her true identity and be granted amnesty. Thereafter, she would insist upon traveling with the Kalach-Cha, claiming that her knowledge about the King of Shadows and the Sword would be of the utmost importance to the hero in the coming battles. Among the first things she revealed was the meaning of the name "Kalach-Cha," which evidently meant "shard-bearer" in the githyanki dialect of Undercommon.

Zhjaeve would prove useful in many ways, helping the Kalach-Cha learn the secrets of the shards and his/her connection to them. Zhjaeve told the Kalach-Cha that, with one of the shards embedded in his/her chest, he/she served as a nexus and heart for the Sword of Gith, and the sole person able to wield it so long as the shard remained within him/her. Zhjaeve would also reveal the origins of the King of Shadows as an Illefarn construct known as the Guardian as well as the root of the Githyanki's feud with the Guardian.

With Zhjaeve's help, the Kalach-Cha would recover many of the remaining shards and discover the secrets of the Ritual of Purification. In order to learn the ritual, the hero and Zhjaeve would travel to the ruins of Arvahn. There, the Kalach-Cha, with Zhjaeve's help, would undergo the preparation for the ritual, before following a song portal back to West Harbor, where the last statue needed for the ritual was located. However, upon arriving they discovered the village had been utterly destroyed. Realizing the King of Shadows was on to them they rushed to some Illefarn ruins near West Harbor, only to witness Ammon Jerro take the secrets of the ritual first, followed by the destruction of the statue by one of the Shadow Reavers serving the King of Shadows.

As a result, the group would be forced to pursue Jerro to his Haven. Pursuing the warlock to his base, the team would eventually find and ultimately recruit him. He and Zhjaeve would immediately distrust one another, though ultimately both would prove useful in the war effort. The next task they found themselves confronted with was the seeming invincibility of the Shadow Reavers who had fought them in West Harbor. For this purpose, the Kalach-Cha and Zhjaeve would accept the aid of Sydney Natale, a Luskan wizard who claimed to be in possession of the true names of the shadow reavers, though she demanded that only the sorceress Qara and Zhjaeve accompany the Kalach-Cha. Although it turned out to be an ambush, the three were able to successfully defeat Sydney and the animus elemental accompanying her while also reclaiming the true names.

After this the group returned to Crossroad and confirmed the true names, which they then tested in battle against the shadow reavers successively, felling their first member of the undead servitors and reclaiming a silver shard from it. Although this was not yet all the shards from the Silver Sword, it was enough, Zhjaeve deemed, to reforge it. Returning toe West Harbor, the Kalach-Cha and Zhjaeve reforged the Sword together and discovered that, in battle, the Kalach-Cha could shape it at will due to his/her unusually close connection to the blade. They soon had a chance to test the blade, when another shadow reaver arrived to try and stop them, only to fall before the power of the Sword.

It was not long after that the war picked up in earnest, the Kalach-Cha and the forces of Neverwinter preparing their final assault against the King of Shadows. When the Kalach-Cha left to destroy the King of Shadows' fortress within the Vale of the Mere, Zhjaeve, like all of the hero's companions, accompanied them. There, Zhjaeve proved useful once again, reading the true names of the Shadow Reavers along with Ammon in order to end their unlife, clearing the path to the King.

Zhjaeve's ultimate fate is unclear. When Ammon later met the Kalach-Cha within the Academy of Shapers and Binders in Thay, he was unable to determine whether or not Zhjaeve had perished in the collapse of the King of Shadows' citadel or not, having not seen her during his attempt to rescue the hero from the machinations of the Founder.

Zhjaeve was voiced by Lisa Emery in Neverwinter Nights 2. 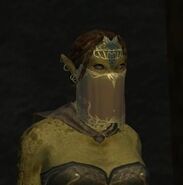 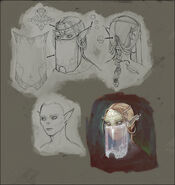 Retrieved from "https://forgottenrealms.fandom.com/wiki/Zhjaeve?oldid=529190"
Community content is available under CC-BY-SA unless otherwise noted.